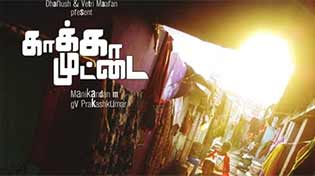 TIFF will take place between Sep 4 and 14.

"Dhanush's 'Kaaka Muttai' will have its world premiere at TIFF this year. Dhanush and the film's director are expected to be present for the screening," a representative from TIFF told IANS.

"Kaaka Muttai", which is directed by debutant Manikandan, is co-produced by filmmaker Vetrimaaran.