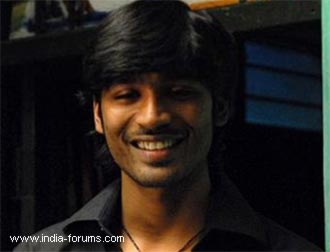 Southern actor Dhanush, who became an overnight success across the nation thanks to the song "Kolaveri di", has signed his first Bollywood project "Raanjhnaa".

The movie will be directed by Aanand L.Rai of "Tanu Weds Manu" fame. He says he chose Dhanush for his simplicity.

"For the past six months, I've been looking for a simple boy to play the lead in 'Raanjhnaa'. My requirement was a man who could look vulnerable on screen. When I saw Dhanush in the Tamil film 'Aadukalam'. I liked him immediately. He looks very ordinary and honest, and that was the demand of the character," Rai said in a press statement.

If the grapevine is to be believed, the director had approached him for the movie before the success of "Kolaveri di", sung for his Tamil film "3".

Dhanush, who is iconic hero Rajinikanth's son-in-law, is not too well versed with Hindi. But it won't be a barrier for his Bollywood career as he is keen to explore the industry and learn the local language and culture.

"It's a big deal to get a launch like this at the beginning of my career here. Aanand's script is different from regular cinema; it's one of those 'made to make a difference' kind of films," said Dhanush.

"The film is an intense love story. Just like my film 'Tanu Weds Manu', the film and its characters will take you to Delhi, Punjab, Chennai," said Rai.

Both Dhanush and Rai recently visited Benaras for the film.

The actor is also perhaps planning to hire a coach to learn Hindi. He is convinced that by the time the film's shoot gets over, he will be able to communicate fluently in Hindi, which will open more avenues for him.

Nakuul Mehta and his powerful narration: Times when he hit ...
4 hours ago