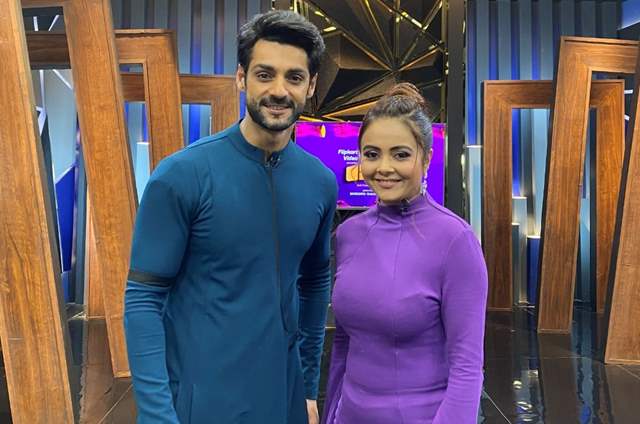 Bigg Buzz on Voot is the one and the only place that serves as an “Asli fans ka Asli Adda”, where every week, entertaining host Karan Wahi brings on a celebrity guest to discuss all the latest juicy gossip from the fiery Bigg Boss 14 house. In the second episode of the season, Karan introduced a celebrity guest, Bigg Boss Season 13 contestant Devoleena Bhattacharjee. Given her experience in the house, she expressed that she misses the house and that since she has been a part of it, she understands it better. Also, she got a lot of messages from her fans asking her if she would be a part of season 14. Catch the exciting episode only on Voot, where she is joined by recently evicted Shehzad Deol to discuss their views on the contestants on this dramatic season of Bigg Boss.

Reviewing Shehzad Deol's recent eviction, she stated, “Shehzad actually acha khel rahe the, voh dusro ke mudde mai ghuste nahi thee but jabhi bhi bolte thee voh correct bolte thee." However, she felt he should have kept his points strongly in front of housemates, “Wahan shayad thode weak padh gaye vo”. In a surprise twist, the eliminated contestant of the past week, Shehzad joins the episode via video call. When Devoleena asks Shehzad if he gets a chance to go back into the house and replace someone then who would it be? He takes Jaan’s name. On being asked about the friends he made inside the house, he took Sara’s name, while also mentioning his special bond with Jasmin, calling her his sister. He reveals he shared a good equation with Abhinav and Rubina too.

To add an element of fun, Karan plays a game – Before & After Impression, where they discuss their first and last impressions about the housemates.  Shehzad refers to Eijaz as his big brother when he first saw him and “Saanp” as his last impression of him.  Furthermore, his opinion on Nikki Tamboli was “Pehle Nikki kaafi hot lagi thi mujhe but afterwards irritating." He also uncovered that he thought that Nishant had an attitude and was cool when he entered, but in reality he is a confused personality. In terms of Jodi, Rubina and Abhinav, he felt their personalities appealed to him when he first met them and he still feels the same way about the two of them - "Yeh jo hai, jaise hai, genuine hai. Jo feel karte hai bolte hain. " Rubina Diliak is clearly winning hearts outside the house as well, as Devoleena says, she always knew that Rubina is a strong personality with a huge fan base but after watching her inside the house, she thinks that she is a very strong player too. According to her, she is the best contestant of the season.

Karan plays another game Out of the Box where Devoleena is supposed to pick up an object from the box and give the name of a contestant who needs it. She says “Kharbooja” in reference to Eijaz Khan, according to her, “Kyunki vo rang badlenge”. For Nikki Tamboli she says “Tape” as she feels she is cute but the moment she opens her mouth it is damn irritating. A “dictionary” would be appropriate for  Pavitra as she abuses a lot. Before leaving, Devoleena predicts that Jaan would be the next contestant to be evicted.