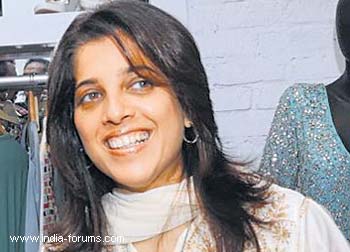 Designer Shabina Khan has turned co-producer with the forthcoming film "Rowdy Rathore" and says she is not the official designer for the action movie but has created few costumes for Akshay Kumar and Sonakshi Sinha.

"I have been associated with Sanjay Leela Bhansali from 'Khamooshi' days. We have been great friends and we wanted to do something together like this. I had a production house. I have produced three serials in the past. I always wanted to produce film. With 'Rowdy Rathore' things fall in place and we started the project," she told IANS.

As a designer she designed for Salman Khan, Shah Rukh Khan, Rani Mukerji, Hrithik Roshan and Madhuri Dixit. Bit says that she is not the official designer for the film.

"I have designed few clothes for Akshay Kumar and Sonakshi Sinha in the film but I am not the official designer for 'Rowdy Rathore'," she added.

Shabina praises Bhansali for giving her lots of freedom as a producer.

"Sanjay gave me all the freedom as a producer. He is one of the nicest co-producers in the industry. I did the entire film. My involvement with the film was right from the beginning - from location hunting till the final product," she said.