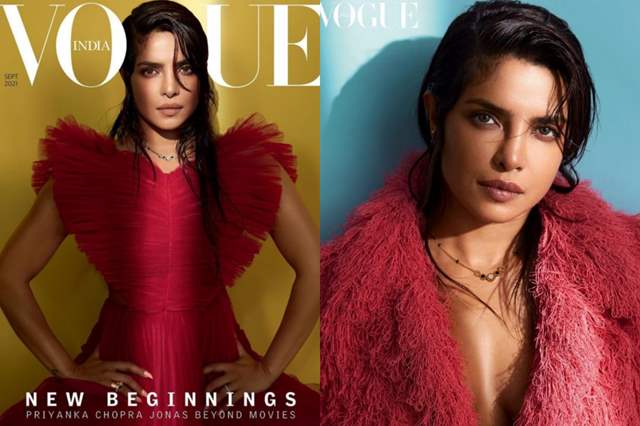 Whether it is the style of saying Namaste with folded hands at every event or wearing Indian Saree on many important occasions.

Priyanka Chopra, who has become a global star, is still seen presenting proof of being India's 'desi girl'. At the same time, recently Priyanka has once again come into the discussion about one such avatar of hers.

She has come into limelight for flaunting beautiful mangalsutra in her latest vogue magazine photoshoot. In these pictures, she has completed the glamorous outfit and makeup with mangalsutra.

Priyanka has shared many glamorous and bold pictures one after the other, in which she is wearing a puffy red color gown and with it she has matched the mangalsutra.

However, this is not the mangalsutra she wore on her wedding day. Priyanka shared the pictures of the shoot and  said in the caption that this mangalsutra will be launched soon.

She wrote- 'My first Vogue India cover was 15 years ago… I was one of their first cover stars. Now with my 11th @vogueindia cover, and with my new relationship as Bvlgari’s Global Ambassador, this collaboration seems so perfect. This is a relationship that has been many years in the making, and is one that brings me such joy for so many reasons…one of which is the Mangalsutra (coming soon) that we created. Discussing with @jc.babin, @lucia_silvestri and the @bulgari team almost 3 years ago and seeing it come to fruition is such a great feeling - it’s so elegant and chic, designed for the modern Indian woman who takes charge of her own life.

I’m so proud of this partnership. ??'

asad_ayub 13 days ago hmm, the celebrity is really a good one. oyeyeah.com