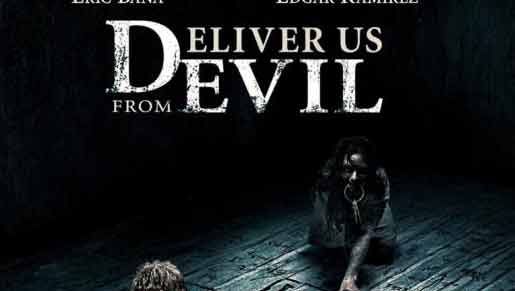 Packed with cliches, "Deliver Us From Evil" is an exorcism drama that involves a police procedural plot. It is neither sinister, forbidding nor intimidating. But fans of the genre would find it entertaining.

Set in 2013 Bronx, New York City, the film is based on the real life experiences of Ralph Sarchie (Eric Bana) a former sergeant from the New York Police Department.

Struggling with his own personal issues, Sergeant Ralph has a spiritual gift that attracts evil. He, along with his colleague Butler (Joel McHale), investigates a series of inexplicable crimes that include the murder of a baby, a woman throwing her child in a moat in the zoo and women being battered.

There seems to be a link between all these crimes that involve domestic violence, which has suddenly mushroomed in his territory.

Upon investigation he realises that the cases are linked to three Iraq war veterans.

He joins forces with an unconventional defrocked Spanish priest Mendoza (Edgar Ramirez) who believes that the issues are more than post-traumatic stress disorder.

Ralph rubbishes the claim and tries to demystify the entire process by being pragmatic in his approach to the investigation.

Mendoza, who is trained in the rituals of exorcism, warns Ralph that he is the soft target of evil forces and soon enough paranormal activities occur at his house, where his wife (Olivia Munn) and daughter (Lulu Wilson) spend a lot of time without him.

Left with no choice and with the sudden revelation of an obscure Latin inscription, Ralph who initially did not believe in God or Evil is now forced to partake in the exorcism exercise along with Mendoza, who explains to him the four stages of exorcism.

On the performance front, all the characters are convincing to a point. But it is the British actor Sean Harris, who plays the ex-soldier Santino and the terrifying villain, who outshines the others. He is particularly spectacular in the possessed scene where he turns and stretches his neck backward and alters his voice in the most distressing and convoluted manner.

Director Scott Derrickson has crammed this script with standard genre templates with false scare pile-ups, which smoothly integrate into the narrative. This at the end winds up re-affirming the protagonist's Christian faith.

Obviously he was desperate to recreate the magic of his previous films 'Sinister' and 'The Exorcism of Emily Rose'.

Apart from a couple of jump scares, the film is straight laced and lacks in freshness in the spooky department. The scenes of the bizarre occurrences reloaded with spooky atmosphere that are often seen; night shots along with paranormal activity, buzzing radio frequency and animals like dogs, owls, tigers, crocodiles, aggressive fish in the tank and dissected squirrels.

The police investigation manages to hold your attention with its dark, eerie frames. The climax lingers with lots of mumbo-jumbo and terrific loud sound effects.

Overall, "Deliver Us from Evil' is a tolerable letdown that will make you jump and squeal at times.