View Profile
Having garnered an enviably enthusiastic audience response during its run on the silver screen, Delhi Belly is 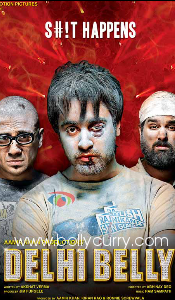 all set to take over on television. However, this will require more than a simple cut-and-paste because of the risque language and content of the film. According to the telly censor board, the production must be re-edited and re-dubbed if it moves to the small screen in the interest of younger home audience members.
While this is what the committee has requested, the filmmakers believe that such a change would cause the film to lose its essence and render it unintelligible to the audience, in which case it might as well not be shown at all. There may have been rumors that certain portions were being re-shot for the small screen, director Abhinay Deo conclusively denied them. The re-dubbing will take place along with a select few edits, but he consented to no further tweaking as it would compromise the concept of the film.

We're sure that this hilarious film will retain most of it's entertainment value even in G-rated form, given today's television landscape, we wonder whether there was anything in the original that younger home audiences haven't already seen!
Editors: Lola & Jenifer
Graphics: Sano

Richa Chadha sets the Screen on Fire her Hot Belly Dance in Taaza: ...