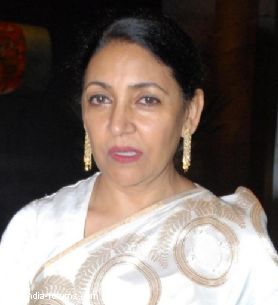 Veteran actress Deepti Naval, who is here for the third Ladakh International Fillm Festival, says she has movie a script in mind that she'd love to shoot in the fascinating landscape here.

"I have a script in mind that I want to make. It's called 'Colour Of Snow'. I think I will shoot it here and tab main yahin bas jaungi (I will just be here when I make it)," Naval, who will wear don the director's hat for the film, told IANS.

A traveller at heart, the acclaimed actress has fond memories of her adventures in the picturesque terrain.

"I came to Ladakh first in 1993. Then in 1999, I came and clicked a lot of photographs and later did a photo exhibition called 'In Search Of Another Sky'. Then I came here in 2004 because I wanted to do the Frozen Lake trek - the Chaddar trek. It has been my most precious experience, said Deepti, and added that she shares a deep-rooted bond with the destination.

She is here to pay tribute to her late friend and co-star Farooque Sheikh, who died Dec 27 2013 following a cardiac arrest in Dubai.