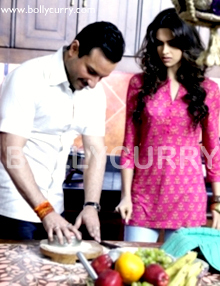 use of her culinary skills in the kitchen.For a scene in her much awaited film Aarakshan, co-starring a whole host of stars including Amitabh Bachchan and Saif Ali Khan, Deeps was asked to make perfect, round rotis - a task that left the actress utterly stumped.

DP, who claims to be a decent cook otherwise, finds making rotis a challenge, and was hence put to spot when presented with loose flour. The actress tried to wriggle out of her embarrassing ordeal by requesting another dish to be made, but Jha was adamant over rotis being it for the scheduled scene.

With no choice but to proceed, Dippy went on with the scene, producing rotis of all shapes and sizes, save those of round. After futile many attempts had been made and Deepika was clouded in flour, Chotte Nawab Saif (from a chuckling audience of crews), offered to pit in assistance but found no better luck himself. It was finally Jha to the rescue who swept in after much amusement and taught Deeps the needful.

Our say to Jha?! Exploit Dippy's forte in tattoos, eye candies, and talk shows; for the lesser tasks, how about trying tricks of the lens and trusted body doubles next time?!

Deepika Padukone mobbed by fans; looks troubled as a women tries to ...