Actress Deepika Padukone has been approached for a motivational campaign during the 2012 London Olympics to encourage the young generation to take up sports. 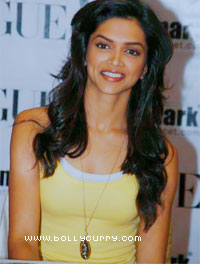 any campaign that encourages people to take up sports in our country,' Deepika said in a statement.

'Yes, she has been approached. In all meetings, the board has been saying that she is the only one they would like do it because she has a very strong bond with sports,' said an official spokesperson from Sports Development Corporation, the board promoting Olympics.

After a successful stint as a model, Deepika ventured into movies with blockbuster 'Om Shanti Om' and also featured in hits like 'Bachna Ae Haseeno' and 'Love Aaj Kal'.

The actress has also been approached to become the face of badminton in India.

Nawazuddin Siddiqui Waited 20 Years to Work with Sudhir ...
3 minutes ago

Rakul Preet Singh confesses to being a part of drug chats ...
33 minutes ago