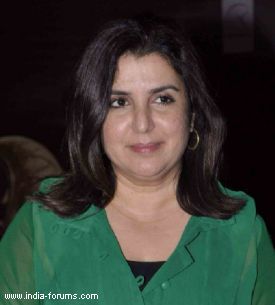 Isn't it interesting that when Farah Khan wanted a newcomer for her 2007 film "Om Shanti Om", she zeroed in on then debutante Deepika Padukone? And when she wanted a "star" for her new film "Happy New Year", it was the same name that struck her.

Farah says Deepika leaves her impressed with her all-rounder quality. "I'm so happy that Deepika is in 'Happy New Year'," Farah told IANS on phone from Mumbai.

Busy directing "Happy New Year", she can only look back with a smile at how Deepika has emerged in a league of her own.

Rightly so! The actress delivered four back-to-back hits at the Bollywood box office in 2013 - "Race 2", "Yeh Jawaani Hai Deewani", "Chennai Express" and "Goliyon Ki Raasleela Ram-Leela" - and emerged as a hero among heroes, quite literally.

Each role and film was different from the other and yet each of these sailed smoothly to the Rs.100 crore club. Deepika's dancing, acting, poise, confidence and most importantly, her versatility, was hailed.

She recently clinched both the best actress awards - popular choice and jury - at the Life OK Screen Awards, where she also staged a startling dance performance.

For Farah, Deepika is an all-rounder.

"Maybe she was very good-looking, she had a fabulous body and she could dance, but in 'Om Shanti Om', we presented her really well.

"After that I felt her potential wasn't being exploited - either she was not acting too well or the directors were not using her well. But I think in the last two years, she has really come into her own and it's not shocking that sometimes she does a scene and I'm like 'great'," said Farah.

The choreographer-filmmaker remembers how during the "Om Shanti Om" shooting, she had to tell Deepika "everything" about playing the double role of superstar Shanti and a commoner Sandhya.

" 'Look left, look right, now turnaround, now smile', I used to tell her everything. But now she comes all prepared and does something wonderful in front of the camera," the 49-year-old filmmaker said.

The process of choosing an actress for "Happy New Year" was long and tedious, but Farah is glad Deepika is playing the "pivotal" part.

"For 'Om Shanti Om', I was confident I wanted a newcomer. And for this one ('Happy New Year'), I felt I needed a top actress to hold a whole drama between five guys together. Deepika was perfect," she added.

The casting for the role that Deepika plays in the movie went on for almost a year, recalls Farah. And then the filmmaker also had the curious media playing the guessing game for a long time.

"It had become a national obsession," Farah quipped.

"She's got such a pivotal role. She's the only girl and she's literally their coach and teacher. Deepika has become such a good actress that even I was shocked sometimes with her acting," said Farah.

The movie is currently being shot, and it will be ready for release around Diwali this year.