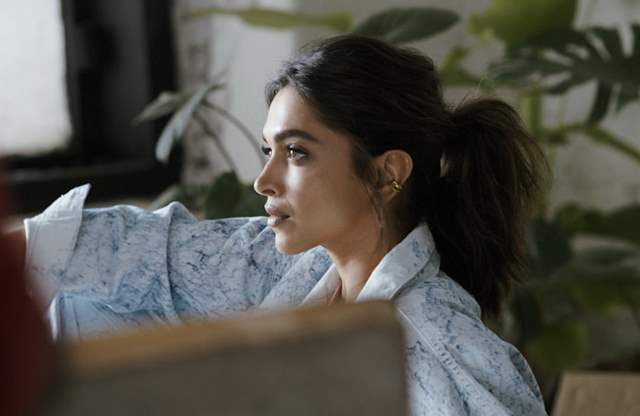 Deepika Padukone has been one of the top actresses in the tinsel town and have shone as a popular face amongst the masses. The stunning actress has consistently maintained the spotlight thanks to both her films and her great sense of style.

Deepika Padukone is one of those divas who can flawlessly pull off any look, be it the casual street style, the ethnic one or the classy and sassy one.

The leggy lass has been experimenting a lot with her appearance lately, and what has people's attention is her penchant for wearing oversized denim outfits.

Recently, Deepika Padukone posted the behind-the-scenes photos from her recent ad shoot on her official Instagram account. What do you suppose I'm thinking, questioned the Pathaan actress in the caption of her picture. With matching baggy denim pants, a peach t-shirt, and an oversized light blue denim jacket, Deepika looks chic and stylish. Flashy statement earrings and an unkempt ponytail were the finishing touches to her ensemble. These pictures of DP have got the fashion police behind her taking hints about how to rock a chic look with minimal efforts.

Deepika Padukone's upcoming acting appearance will be in the much awaited action film ‘Pathaan’. In the Siddharth Anand-directed movie, the actress reteams with Shah Rukh Khan, who was her first on-screen partner in Bollywood. John Abraham plays a crucial role in the film, which is touted to be a part of Yash Raj Films' hugely successful Spy Universe. The release date for Pathaan is set for January 25, 2023.

The actress will shortly begin filming for ‘Fighter’, a next aerial action movie also under Siddharth Anand's direction. Her first on-screen partnership with Hrithik Roshan will transpire with this project.

She will also be a part of ‘Project K’featuring south star Prabhas along with her.