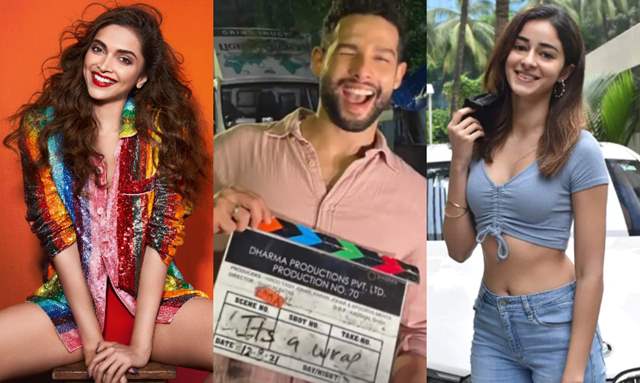 Director Shakun Batra’s next is touted to be one of the most awaited films of the year. The film hosts a stellar cast namely, Deepika Padukone, Siddhant Chaturvedi and Ananya Panday, and the trio will be seen coming together for the first time. According to the recent posts, the actors are known to have wrapped up the shoot for the upcoming film which still remains untitled.

Now, several photos and videos from the sets are doing the rounds on the internet featuring Deepika, Siddhant, Ananya, Shakun and the rest of the team. In the video shared by Deepika Padukone's fan club, Shakun is giving a speech before cutting a cake while Deepika and her co-stars are all smiles. They can also be seen cheering him at the end of his speech.

Shakun is seen telling his crew and cast, "I still have some work left to do, but hopefully we have a film." All are cheering for the director. The fan club also shared a photo of the clapperboard which has "It's a wrap" written on it.

The buzz is, Deepika will be seen portraying the role of a fitness instructor in the film. While no further details have made it out, it has even been difficult for the fans to speculate the type of story or the genre their favourite actress has opted for her next.

Meanwhile, Deepika even shared an Instagram story of Siddhant Chaturvedi which featured him holding a clapboard and added the caption, ‘It’s A Wrap’. Fans surely won't have to wait longer considering, completion of the film’s shoot.