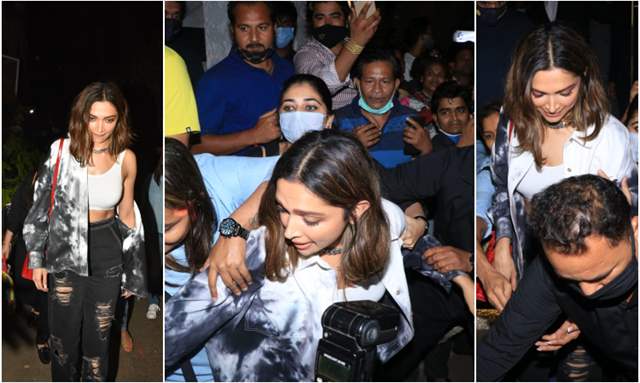 Bollywood actress Deepika Padukone is currently gearing up for Pathan and she is frequently spotted in Mumbai over the past few days. The Om Shanti Om star was recently spotted exiting a restaurant in Mumbai and the shutterbugs soon swarmed her with flashlights.

However, the situation got out of hands as Deepika ended up looking troubled. In a shocking turn of events, the actress landed in a tough spot as she encountered a sea of fans, onlookers, and paparazzi surrounded her from all corners.

Celebrities are often seen getting stuck in similar situations, however, apart from being mobbed the Chhapaak actress’ was taken aback by a fan’s unprecedented move. The red handbag which she was carrying also got caught in between as someone tried to pull it while she made her way out of the crowd.

Meanwhile, on the work front, Deepika Padukone will soon shoot for Pathan which stars Shah Rukh Khan and John Abraham as male leads. It is also being speculated that Salman Khan will be making an extended cameo in the movie and reportedly began shooting for the same on Thursday.

On the other hand, she is also shooting for Shakun Batra’s untitled film which also stars Ananya Panday and Siddhant Chaturvedi in a pivotal role. Deepika will also team up with Hrithik Roshan for Fighter.