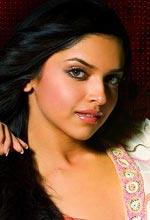 Whatever you may think of her, dimpled lass Deepika Padukone has been extremely lucky when it comes to her pick of co-stars.  After giving hits with Shah Rukh Khan, Saif Ali Khan and Ranbir Kapoor, the actress will now be seen with John Abraham!
Apparently John, following the latest trend of remaking Tamil movies, has been interested in a Bollywood version of Tamil hit, Milaga, after recently watching the movie.  Currently producer Kalaipuli S Thanu holds the rights to remake the movie in two languages - Hindi and Telugu.
The Telugu version will likely star either Allu Arjun or Prabhas.  Meanwhile the Bollywood remake, titled Mirchi, will see Deepika opposite John for the first time.

To be shot in Goa, the movie is said to be a realistic take on the life of a group of youngsters.  However the movie promises to be racy and attractive to an audience of all ages.

Sanjay Choudhary Attacked By Goons; To File a Police ...
an hour ago