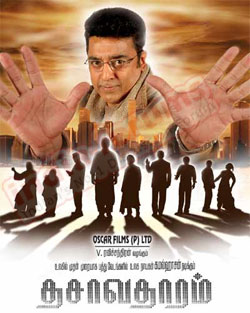 Featured Video
', starring superstar Kamal Haasan and made on a whopping budget of Rs.1.3 billion, - the costliest Indian film ever made, is set to hit screens across the globe in two languages Friday.

About 1,000 prints of the film in Tamil and Telugu are being released. The apex court Thursday cleared the decks for its release by dismissing a plea by a Hindu sect that it would hurt the religious sentiments of some.

The film features the veteran actor in an unprecedented 10 different roles - creating a world record for the maximum roles in a single film. In more ways than one, the film is historic.

Cinema owners told IANS that they are booked for at least three weeks in advance.

Kamal leads a bevy of beauties led by Asin and Mallika Sherawat in the film shot in India and abroad. Some shots were even filmed under water.

'One of the graphics highlights is a scene that features five Kamals in a single car,' said the publicist.

The Hindi version of the film will be released two weeks later.

Although Kamal left no stone unturned to craft an exceptional film, controversies tailed the movie and its producer throughout.

At least three cases were heard in the Madras High Court and an appeal reached the Supreme Court.

The first time the film came into the news when The Academy of Motion Picture Arts and Sciences threatened to take producer 'Oscar' Ravichandran to court for using the golden Oscar statuette without permission.

Later, its music release event, attended by Chinese actor of international fame Jackie Chan and Hindi thespian Amitabh Bachchan, drew criticism due to some journalists and fans being cane-charged in Chennai in early April.

While ironically Chan expressed ignorance about Kamal during the press conference, Chinese press assailed their icon for misbehaviour in an Indian hotel, a charge denied by the martial arts exponent-actor.

Kamal's fans are sure the movie will be a smash hit.

Those who have seen the movie told IANS that its visuals are breathtaking.

'The box-office verdict will vindicate Kamal's efforts,' a publicist added.