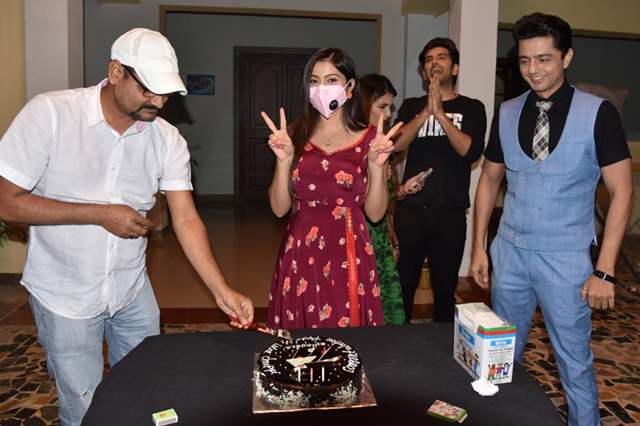 Leading Hindi General Entertainment Channel, Dangal, a part of Enterr10 network recently became the first Hindi GEC to air fresh episodes of their fictional show Pyar Ki Luka Chuppi. Adding another feather to its cap, the channel crossed the monumental 100-episode landmark for its original programming show Pyar Ki Luka Chuppi. The day brought great joy to the entire team of the show which was followed by a small celebration on the set.

Popular amongst viewers from across the heartland, the show has been an instant hit with the viewers. After Sarthak (Rahul Sharma) and Srishti (Aparna Dixit) parting ways from their marriage, the show took a one-year leap with Srishti now in a bold new avatar. The show also witnessed the entry of a new character, Angad played by Alan Kapoor who plays a pivotal role.

The 100th episode will witness Angad in a dilemma about taking the responsibility to tell Srishti’s past to his family before they tie the knot, while some family members who are aware of this are trying their best for the marriage to be called off. On the other hand, there is a hard push for Sarthak and Myra to get married to each other before Srishti’s marriage.

Expressing happiness on the success of the show, Aparna Dixit who plays the role of Srishti, said, “This 100-episode journey has been a very special one for all of us amidst these unprecedented times. As an actor, I feel blessed to have successfully completed this milestone and I wish that we cross many more. This landmark wouldn’t have been possible without the love and affection from our viewers. Rejoicing on the completion of 100-episodes, we made sure we are following all norms of social distancing while celebrating our success. Since our show airs daily, the team is putting in a lot of effort to give their best to the audience and therefore we decided to do a small cake cutting session on the set before resuming to shoot.”

Rahul Sharma who plays the role of Sarthak, added, “Completing 100 episodes of a show you denied twice and eventually fell in love with is a completely different experience and feeling. I finally heard the story and signed the show. And the best part of this journey is that the story has remained exactly the same like it was first narrated to me, unlike other shows. It was very beautifully written and executed. The team is so wonderful and the character also challenges me to do better. So, it is a very satisfactory feeling as an actor. I consider the show as a blessing in my life. It feels great to complete 100 episodes of Pyar Ki Luka Chuppi and looking forward for many more.”

Alan Kapoor who plays Angad recently became a part of the clan, said, “It is amazing to reach this landmark and I am happy to be a part of the journey! The show has reached a good juncture and I am sure it is a historic moment for the entire Dangal family and I hope we cross many such milestones. The set is beaming with good vibes and happiness and I am already feeling the positivity in the air.”

The cast and the crew celebrated the successful completion of their 100-episode milestone by cutting a cake on the set while following all norms of social distancing.

Keep watching Pyar ki Luka Chuppi daily at 7 pm only on Dangal. The show is sure to keep viewers excited and gripped with new turn of events.