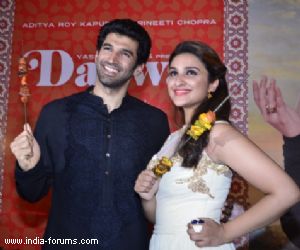 The recent trailer launch of Daawat-e-Ishq witnessed a lavish iftar party along with it at Yash Raj Studios. The trailer shows that the movie revolves around a lot of food and cuisines in it.

When asked about the experience Aditya Roy Kapur says, "for a change I am not drinking but eating in this film. I am making food and then eating my own food" (Laughs) He adds, "I have put on 10 Kilos in the film. Because even though we were not eating on camera, we were eating off camera. We have shot at Hyderabad and Lucknow, so the lunch use to come from some amazing kabab corners every day." Speaking about the difficulties in shooting, he said, "The difficulty was not putting food in your mouth, because there was so much yummy food around."

Since the Biryani's of both Lucknow and Hyderabad are very famous, the actors were asked to choose their pick. Aditya Roy Kapur said, "Since I am from Lucknow and I make Biryani in the film, I like my own Biryani." Even Parineeti Chopra agreed with Aditya and said, "Even though I am from Hyderabad in the film, I prefer Lucknowi Biryani too."