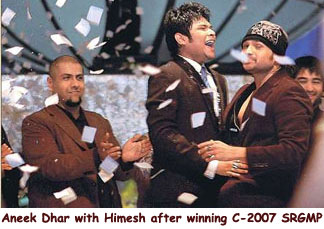 Zee SaReGaMaPa C2007 reached its finale and gave a fitting closure to another season of journey of voices, music, sur, taal, some exceptional performances, the magic of the magical mentors of the show, and of course the strong (over)doses of drama. The venue for the show, Andheri Sports Complex was decked up in magnificent splendor, and the celebrity list was endless. The stadium was packed to capacity, and it was a marathon 4 hours show with mentors, the top 12 participants, previous SRGMP participants and also celebrity guest Akshay Kumar crooning. The final results saw Aneek Dhar from Kolkata as the winner, while Raja Hasan from Bikaner was the first runner up followed by Amanat Ali from Pakistan. But the show stopper was Himesh, the winning mentor of the Rock Gharana. He was so excited at the news of Aneek winning that he forgot where he was, and just refused to let go of the mike. He narrated out all his past, present and future projects and could have gone on and on with his talks on “Sanskriti”, had Aditya not stopped him - “Am I Right”, Himesh? The manner in which Aditya handled the whole show proved beyond doubt that he has come a long way now to become one of the best hosts. 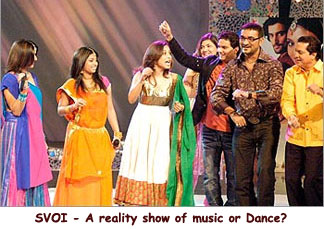 We can understand the extravaganza in C2007, but what was the occasion for celebration in SVOI? The show was more of a musical concert this week than a contest. On Friday, Babli Rani Mukherjee ran the show, including the hosting, as Shaan put in on Saturday, it was not a Shaan daar show but a “Ranidaar” show. There was so much of dancing, be it Shaan, Adesh, other mentors or even contestants, that it was difficult to keep track of the singing. Abhilasha, a really good talent bit the dust and got eliminated. Before the sudden wild card entries were done it was Abhilasha, who was the winner among girls. 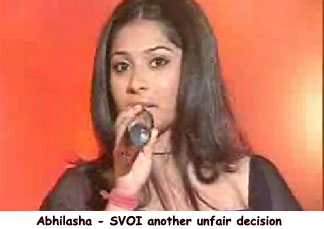 But now with this unfortunate elimination and unfair wild card rules, she gets deprived of this crown. The invisible format of the show ended into giving out yet another very unfair decision on a contestant in the show. The jugal bandhi between the contestants is even then understandable, but why was there a contestant and judges/host duet round, which also put a question in the minds of the viewers if those performances were lip-synced. This week the audience hardly listened to the solo performance by the contestants and the songs performed were already performed by the same contestants in the show. Then on what basis are the viewers expected to vote for them? The show first got stretched by few weeks after the “Multiple” wild card entries, and now even on individual days the show time is being stretched so much that viewers are finding it difficult to sit and watch it till late(mid)night.

If Rani was a very hospitable host, then Shiny Ahuja proved exactly opposite. When the judges of SVOI were taking such nasty potshots at the other musical shows, to comment that all other shows were “Noise of India”, reflects very poorly on his conduct as a special guest. It is still not clear why the judges went on such a rampage against the other shows, not clear if they were trying to convince themselves or the viewers. But these mentors should have thought before discussing this issue in so much detail as this week itself the show seemed to carry over the “Nach Baliye” fever and made it more of a dance event rather than a musical show. Star TV has still quite a few episodes remaining now of this show, but it was interesting to see how they decided to promote their next upcoming show LIL champs. Wonder if it had anything to do with the rival channel starting the same show next week.

A show is made successful by the package it presents. In a musical contest, the package should essentially focus on the singing talents and promote that. The channels should all realize this and work on it. Badmouthing a rival show, losing focus on the contest, or bringing in endless extravaganza can only dampen this effort. The viewers really don’t like Suron ke saath samjhauta.

+ 2
14 years ago I'm really going to miss srgmp it was a rocking show. SVOI turned into a unfair show where injustice is being done in every step, I'm not wasting my valuable time watching an less singing more drama.Gajji needs to come up with a better paln if wants to take SVOI through sucsess.

14 years ago i dont know what to make of HR...never seen someone like him >_>

+ 4
14 years ago God Star Plus is really bent on ruining its reputation...with the ASVOI show.....the judges are too much...the producer Gajender is too much.....and now...Shiney Ahuja...a new actor...on the block who can't carry a tune...says the other shows are Noise of India...was he sure he was not refering to the one he was attending.....

I watched the first episode and seeing the judges I didn't watch the show. I watched some performance on you tube though since there would be only the best performances and I had no time to waste on the show..

Public knows all and we all know which is the best...

14 years ago ASVOI IS THE WORST SHOW EVER MADE. iT IS NOTHING MORE THAN TRASH. A BIG SHAME ON VOICE(NOISE) OF INDIA.

+ 2
14 years ago what an irony for the VOI judges to say the rest of the contests are noise of india when they themselves give out more noise pollution than any man made objects.

SRGMP & Indian Idol were & are far better shows than SRGMP. at least they don't take potshots at other more successful music shows.

14 years ago I will miss SRGMP... it was probably the best musical talent reality show! I haven't seen SVOI but reading all the comments and issues that come up in that show... doesn't sound too good. Now the special judges on that show are started to act like the judges, very disappointed in Shiney!

14 years ago Loved the way you brought out the true picture of the musical farce show named VOI. I don't watch it for these reasons. So, Adesh is back after he realized how much people really like him. I am so glad that he was eliminated on the first day from the other show.