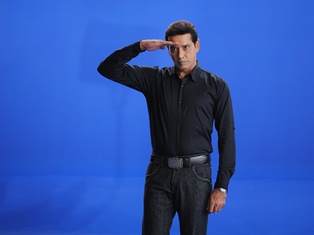 "Kaash thodi savdhani barti hoti, kaash pehle se kuch kadam utha liye hote"; the feeling of regret after the crime has been committed is intolerable. Your favourite and most popular crime show Crime Patrol on Sony TV is all set to give its fan a brand new theme with a new timeslot which will showcase such cases of our society and help us to take the right step at the right time. Crime Patrol Satark - Sahi Waqt, Sahi Kadam' will help us to make the right decision so that we do not have to repentance and say Kash'. The new chapter of Crime Patrol starts July 11, Friday - Sunday at 9pm only on Sony Entertainment Television.

Speaking about the title Director S Subramanian said, "Crime Patrol now is veering towards looking at the many "ifs" and "kaash" , the expression that often finds it's space after a happening. Through this the show intends to explore the cautions that could have been taken. Be cautious, take the right step at the right time is the new pitch of crime patrol. "Crime Patrol Satark".

The host of the show Anup Soni said, "Satark - Alertness is the basic thing we can do to avert crime not only for others but for ourselves too. There are lot of cases where a person feels after the crime happens ki "Kaash maine aisa kiya hota ya aisa na kiya hota to aisa na hota etc etc." So be alert for yourself and for others and take the right step at the right time'.

The new chapter will commence with the a sensational story of an ugly side of extramarital affairs of a businessman that ends in a murder. Kamal Sawant a man leading a happy married life with his wife Vrinda and a grown up daughter Shonali, suddenly develops an illicit relationship with his colleague Aarti.  Crime Patrol Satark, along with Kamal and Vrinda will bring to the viewers the real tale of what really happened and how was Aarti murdered. Besides this the show will explore incidents of ruthless kidnappings, murder cases which could have been avoided had the victims and their families been more cautious. Crime Patrol Satark will open the audiences minds with these cases making them aware of the dreadful incidences around them.

6 years ago Thanks Crime Patrol for starting this new series and that too at 9 pm...
I wish everyone watches this learn from other's mistakes and be alert in their lives... I have read many incidents in news papers which could have been avoided if people were alert...We are learning a lot from Crime Patrol...I hope everyone else does too..