View Profile
The chocolaty handsome and suavely charismatic Shahid Kapoor features on the Masala cover for this month. Back with the tad long hair, dapper as ever – minus the touch of that clipped moustache we've seen so much of lately! 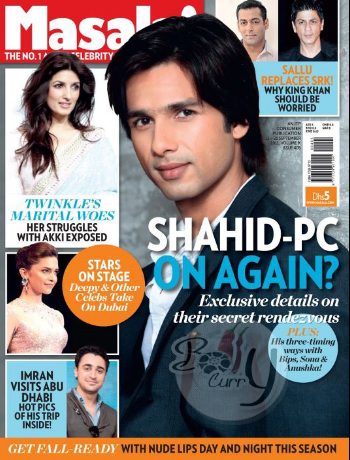 Another film release around the corner and the controversies strike back. Doing the nth round in tinsel world, is the feature story of this issue – speculating a Shasha-PC patch up and other things which go around it. Additionally promised are unheard inside scoops on the couple! Like an allegedly unnoticed three-timing game which Shahid has kept going with Bips, Sonam and Anushka...
Other attractions of the issue - Salman replacing SRK; Twinkle Khanna on her marital vows, Deepika Padukone on her stage appearances and Imran Khan's recent trip to Abu Dhabi.
Catch all of that in one issue of Masala this month!
Editors: Hershi J. & Naseem J.
Graphics: Sano