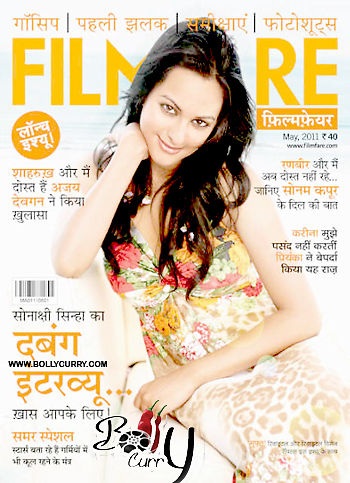 Despite of rounding up all the 'best female debut' awards for last year's super-successful Dabangg in her kitty, Sonakshi Sinha has found yet another reason to be proud about.
Leaving behind the likes of Aishwarya Rai Bachchan, Priyanka Chopra, Kareena Kapoor, Katrina Kaif, Anushka Sharma, Deepika Padukone, Sonam Kapoor among other established and much popular veterans, this one-film-old actress has now become the first lady to feature on Filmfare magazine's first Hindi edition!
This debut issue has casual Sonakshi in a flattering printed-summer dress of orange and pink hues. Illuminated against a light background, this cover is definitely a perfect fit for the season.
Besides the 'Dabangg' interview of Sonakshi's, the issue also features exclusive interviews of Ajay Devgan, Sonam Kapoor and Priyanka Chopra. In addition to that, the 'summer special' copy contains much needed celebrity-tips on staying cool this summer.
Surpassing all other divas, Sonakshi has definitely outdone herself. But is she the right choice to kickstart such a venture? Do let us know!

Rakul Preet Singh confesses to being a part of drug chats ...
23 minutes ago