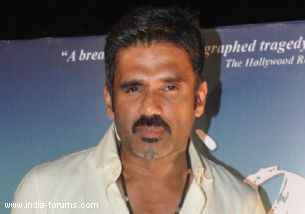 A court here Monday imposed a fine of Rs. 20,000 on Bollywood actor Suniel Shetty after he failed to appear before it in a defamation case.

Chief Metropolitan Magistrate (CMM) Savitri allowed the actor's plea seeking exemption from personal appearance but directed him to pay a fine of Rs. 20,000 for his failure to appear in the court.

The court also told the actor to appear on the next date without any fail.

The court was hearing a defamation case filed in October 2013 against Shetty by Delhi-based stuntman Puran Chauhan, who has alleged that they had made false statements before the Delhi High Court.

Chauhan alleged that Shetty had told the high court that in March 2011, his lawyer was beaten by the complainant inside a washroom in the court building.

He claimed that with the help of his false statement, Shetty had managed to obtain a stay from the high court on summons issued for him to appear in a case in which the actor was accused of not paying him nearly Rs.1 crore.

The exemption plea was opposed by advocate Ravinder Kumar, appearing for Chauhan.

Suniel Shetty lashes out at politicians amid Covid-19 crisis: ‘They ...