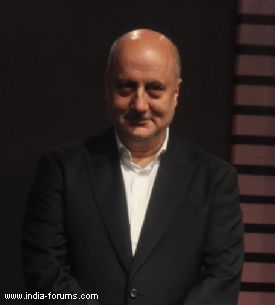 Veteran actor Anupam Kher, who hosted a special screening of comedy-drama "American Hustle" for the students of his acting school - Actor Prepares, says he is confident that the film will shine at the Oscars this year.

The film has been directed by director David O Russell, with whom Anupam worked in "Silver Linings Playbook".

The actor organised the screening of "American Hustle", which will hit theatres in India Friday, along with PVR Pictures at Cinemax, Versova here Tuesday.

"Watching a David O Russell movie made me nostalgic and reminded me of when we shot together for 'Silver Linings Playbook'," said Anupam in a statement.

"'American Hustle' has all the character, intricacy and panache that you would expect from a David O Russell film, especially a con film based in 1970s America.

"The cast pulls off their characters remarkably well, making 'American Hustle' a great lesson in acting. I am confident the movie will be a favourite at the upcoming Oscars," he added.

"American Hustle" is the story of a con man Irving Rosenfeld, essayed by Christian Bale, who along with his equally cunning and seductive partner Sydney Prosser (Amy Adams) is forced to work for a wild FBI agent Richie DiMaso (Bradley Cooper).

Kher, who shares a special relationship with "American Hustle" O Russell, used the movie as a lesson in acting for the students present.