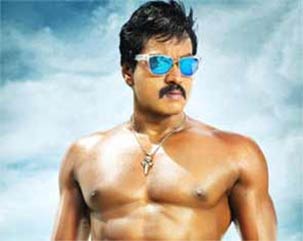 Comedian-turned-actor Sunil Varma, who is currently enjoying his recently acquired status of a lead actor, says he doesn't mind playing a villain if a good opportunity comes his way.

"I always aspired to a villain in top directors' films. I've always been a fan of filmmaker S.S. Rajamouli, and wished to play a villain in his films. I never got that opportunity but had the privilege of being introduced in a lead role by him in his film 'Maryada Ramanna'," Sunil told IANS.

"Even if I land an opportunity to play a villain in Rajamouli's film today, I would happily do it. In fact, I don't mind playing a villain in other films as well, provided I get strong roles," he said.

Having started his career as a comedian with films such as "Nuvvu Naaku Nachavu" and "Nuvvu Nenu", Sunil in the last couple of years had starred in a lead role in "Tadakha" and "Mr. Pellikoduku".

Although he misses playing comic roles, he is happy with his career.

"I remember doing nearly 10 films a year as a comedian, but now as a hero it becomes difficult to even do two films in a year. I don't mind doing few films as long as I'm happy with my roles and audiences like my work," said Sunil.

The 39-year old is currently getting ready to star in a mythological drama titled "Bhakta Kannappa".

Sunil Grover on his Upcoming Comedy Show: The show's Purpose is to ...

Urmila Matondkar Does Not Regret, But Ready to Apologise for ...
6 minutes ago

Shabana Azmi speaks about recovering from her Devastating ...
29 minutes ago

Who is AK in Sushant's Unseen Video that has Surfaced? Watch ...
33 minutes ago