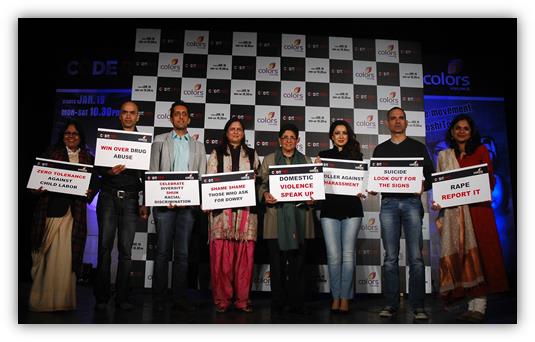 Panelists discuss the topic Battling Demons: Inner and Outer' focusing on issues such as suicides, entrapment, violence against women & children

In a day and age when we are faced with innumerable instances of brutality of the mind and body being carried out against people across the world, hope starts dwindling easily. At a time when human frailties are unable to stand up to the constant badgering by the world and by one's own mind itself, what is a person to do? Urging people to break their silence on issues by providing various perspectives on these very important yet oft ignored questions was COLORS, the channel known for creating meaningful entertainment through a panel discussion on Battling Demons: Inner and Outer' held at Hindu College in Delhi on the occasion on the launch of their new show Code Red that deals with issues such as suicides, entrapment and violence against women and children.

Be it, demons of insecurity, low self-esteem, inferiority complex or the demons that steal our children and sell them off to brothels, we are never really free of them. But are we, the smart ones, really equipped to deal with any of these demons? Can we step outside the shadow of our own prejudices and doubts to listen to that inner voice coaxing us to take action? Are we willing to give hope a chance? Providing their invaluable views and suggestions on the need to instill hope in the victims and motivate them to speak up about the issues they are facing were a prominent group of extremely qualified people that included none other than social activist and Retired Indian Police Service Officer - Kiran Bedi; BJP Spokesperson and  President of Mahila Morcha Delhi Pradesh - Kanwaljeet Sherawat; Senior Journalist - Nalini Singh; Head of Twitter in India - Rishi Jaitly; Actress Tisca Chopra, Actor Manish Chaudhari, Senior High Court Lawyer - Rita Kumar, Addiction and Wellness Counselor - Vijay Simha. The discussion was moderated by RJ Richa Anirudh.

Actress Tisca Chopra spoke about issues she faced while growing up. "There were a lot of restrictions posed on me while I was in college which I didn't like. But over time I realized that our parents are our support system and it's better to get them on your side and take them along with you."

Talking about Code Red which is slated to premiere on 19th January at 10:30PM on COLORS, the face of the show, actor Manish Chaudhari spoke about how television is a great medium to spread awareness. He said, "The show aims to be an enabler of change and in order to see that change we need to be the change ourselves."

BJP Spokesperson and President of Mahila Morcha Delhi Pradesh - Kanwaljeet Sherawat said, "Today's youth is more alert and exposed and they have a mind of their own. We urge the parents to guide their children in a friendly way and understand their point of view rather than impose their career or personal choices upon them"

Noted journalist Nalini Singh spoke about the internal and external demons and how people are locked up in their own personal jail and refuse to speak up. She said, "These days we are victims of raging aspirations and instant fame. We want people to judge us by what we appear to be rather than who we actually are. The solution to all this lies within ourselves. Being helpless won't help."

Talking about how social media can be used as an effective platform to voice such issues said Rishi Jaitly, "Twitter is a great source of personal as well as collective strength. You begin to develop your voice through Twitter and once your tweet travels into the public domain, you understand that your grief is probably a shared grief and sharing often proves to be therapeutic."

Addiction and Wellness counselor Vijay Simha threw light on how it is embarrassing for people in our society to talk about sex and drugs. "We will not get a solution till we talk. I urge people not to shy away from such problems and speak up."

Moderated by RJ Richa Anirudh, the forum led to a fruitful discussion as measures for a better tomorrow were being deliberated. #KhamoshiTodo urged the netizens to send in their queries for the panelists on these internal and external demons while the forum was on.

Senior High Court Lawyer, Rita Kumar applauded Colors for creating Code Red, a platform where issues that are swept under the carpet are discussed openly in order to find solutions for them.

Through this discussion, the esteemed panelists threw light upon the strength of the human spirit when faced with dire circumstances where bleakness reigns supreme. The panel touched upon issues such as suicide, violence against women and children and various forms of entrapment such as being trapped in a bad relationship or being subjected to subtle sexual harassment at work. The panel also outlined a set of basic steps that people can follow in order to do make themselves heard and urged people to break their silence by promoting the Twitter hashtag #KhamoshiTodo.

Code Red attempts to understand human frailties amidst the daily struggles of life and how people react to situations beyond their control. The show, through different perspectives, showcases the steps that people are likely to take when they are pushed into situations where a breakdown is imminent. Code Red will be focusing on three main aspects of human frailties namely: Suicide, Violence against Women and Children and Entrapment. Code Red will attempt, not only to showcase these stories but to make people believe that there is hope, only if they choose to break the silence through #KhamoshiTodo.