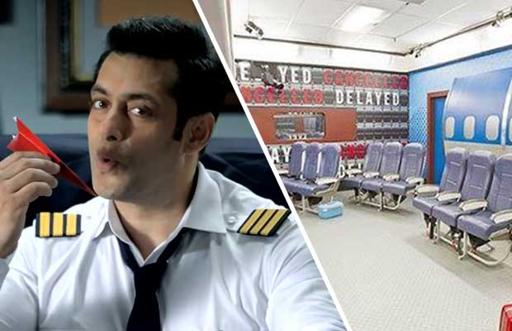 One of the most anticipated show Big Boss is all set to hit the screen soon. Each year it comes with zeal as many new things are introduced and it always creates some kind of curiosity amid the viewers. Well with teasers of the new season are out, we can assume that the dashing actor Salman Khan being dressed like a pilot, the theme of this season can be that of an airlines.

As seen in the picture, the set up of the Bigg Boss house has been created like of an aircraft where the seats are placed in a sequence and the door is resembling to that of an aircraft's door. The status written on the wall  thus gives the feel of an airport.

With the tagline of the show being Sabki lagegi vaat, we are sure that the audience will too be flabbergasted looking at the theme and new season of the show.

We are sure that the teasers of the show will be captivating as the audience is eagerly waiting for fights, heated arguments and more drama.

To know more about the same keep reading this space.

ahsee 6 years ago Symtyms i just hate the channel colors 1st they give us amazing shows like na bole, chal,parichay & the latest rangrasiya t hen axe it completely when a new season of big boss comes up.Boring shows like balika vadhu & uttaran go on for ages.

samicute 6 years ago Big boss is the only hop of colours to survive ..

HotFuzz 6 years ago When will they reveal the contestants ??

vanitha3d 6 years ago Big boss is the only hop of colours to survive ...

ehaab 6 years ago i am waiting for bigg boss.please come fast.