The month of love has finally come a-knocking! We hope violinists are following you all around already. Or maybe Cupid just cornered you at the by-lane? Well it certainly didn't find us because we are not blind and have been foraging the fashion circuit for those who wore the color of love like a second skin and for those who made our skins crawl with horror. So ladies and gentleman, the Fashion Police brings to you our much loved celebs in red.
Deepika Padukone 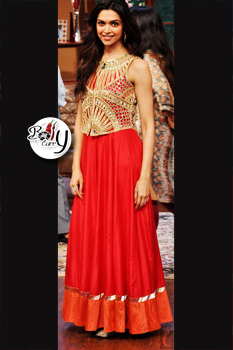 Flaunting the essence of red in some towering length is the vivacious Deepika Padukone who graced the sets of Comedy Nights with Kapil during the promotions of Chennai Express wearing an Arpita Mehta creation. The ensemble consisted of a red flared skirt with a thick orange border and a choli with some flamboyant zari and mirror work. Sparring us from the in-character styling, we could have touched her feet for it! It was love at first sight for us. The dress, a union of tradition and modernity made Ms. Padukone look a charming vision. It was well fitted and we are glad she kept the styling minimal and casual yet precise.
Shilpa Shetty Kundra 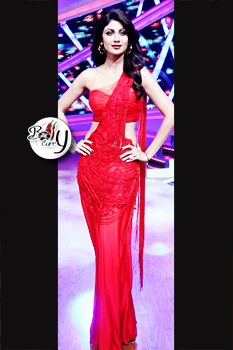 On the set of her dance reality show Nach Baliye 6, Shilpa Shetty Kundra was seen spotting a red Sonaakshi Raaj sari-gown paired with silver hoops from Amrapali. Now Mrs. Kundra has a long list of treasures we envy her for, that svelte figure being on the top but why Shilpa? Why scorn our eyes in that awful dress? The excess bundling up of lace, some hanging strings and a haphazard tassel for the pallu were just too random and off putting. Shilpa is still a gorgeous woman here, it's just the dress we would like to bury. We advice her that there are other ways to keep evil eyes in check than wearing such a horrid talisman.
Ranbir Kapoor 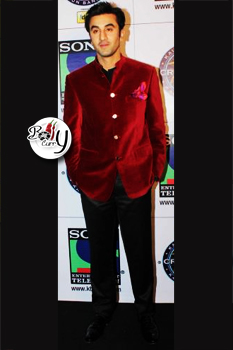 Back in 2013, the prodigal son and everyone's boyfriend, Ranbir Kapoor accompanied mother Neetu Kapoor to the sets of Kaun Banega Cororpati for Besharam's promotion. Wearing a red velvet bandgala with black dress pants and formal shoes, the handsome actor looked like a blue blooded royal with his easy charm and the naughty glint he is such a master at. To this very formal look a little drama was added with the pink/fuchsia pocket square popping through the blazer.
Sonam Kapoor 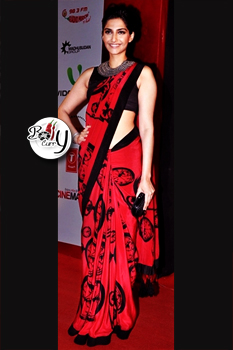 No fashion review can get ahead if the original fashionista of Bollywood, the alluring Sonam Kapoor, doesn't makes an entry. Kapoorin 2013 attended the premiere of Mai wearing a red Kallol Datta sari with black clock prints. Adding to this indigenous bohemian attire was a statement silver necklace and Giuseppe Zanotti Toe-Ring Skull sandals. Hair in an updo, Ms. Kapoor owned the look with a lot of ease. The drape wounded up so beautifully around her that there was no room for mistakes and oozing a certain vintage hippie vibe, Kapoor brought traditional fashion a new definition.
Madhuri Dixit Nene 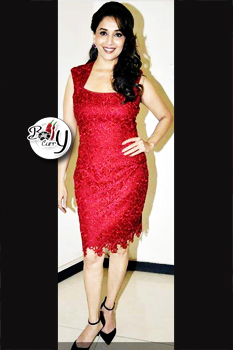 It is just so difficult to review a Madhuri Dixit Nene appearance because there is just not enough you can get of her enchanting smile. And here it was the only thing salvaging her look. While on the promotion spree of her last release Dedh Ishqiya, Dixit made an appearance at a radio station wearing a red Laundry by Shelli Segal dress. If we say that even our local tailor masters would create something much better we aren't humoring you. The amateurish cuts, bad dress martial and an unflattering shaping just makes us feel sorry for Dixit and the torture her stylist made her go through. If the dress was not enough we have some pointed black pumps for you which should be either banned or be heavily fined.
Salman Khan 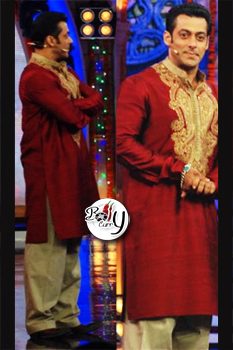 If you think only the most beautiful women have likings for Sabyasachi creations, think again. Dabangg Salman Khan favored the designer too when he was spotted in a red neck embroidered kurta on the sets of his TV reality show Bigg Boss 7. Renowned for his laid back rugged style, this one surely came as a nice surprise. He looked charming and so very enticingly young that it reminded us of the quintessential 'Prem'. And if you think only a bride was missing, well then you cannot just curb the rockstar's soul as he opted for the cowboy boots he paired his traditional ensemble with. There, you have the man as single as he has ever been and we drool with no conscience.
Kangana Ranaut 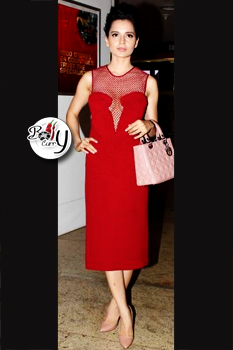 Kangana Ranaut is one such underrated fashion icon who makes you sit up and take notice of each of her looks and make you think why she is not given her due attention. At the unveiling of a magazine cover in 2013, Ranaut left her mutant abilities from her last release in a trunk and wore a gorgeous red Burberry crocheted dress paired with nude pumps and a Lady Dior bag. Hair done in an updo and the natural make-up completed her look and we must say as daring as the dress was, Ms. Ranaut looked so confident in her stance that glitches aside, this was one stunning appearance of hers.
Richa Chadda 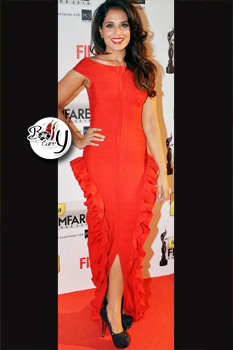 Richa Chadda is sophisticated brazen and she puts that in all her looks. We wonder if it was the same thought in her mind when she dressed up for the Filmfare awards last month. Chadda wore a red hot ruffled L'eger bandage dress with their trademark zipper in front. Sometimes it's these designs which makes us question the standard of a fashion house all together. The ruffles were added at the wrong height, the tapering of the dress was making the whole thing look like a designer experiment in progress and for a horrifying moment, that calf slit seemed like the zipper giving away. It was a confused dress if we must say. Though Chadda looked exceptionally sexy, the dress was another horror story.
Ranveer Singh 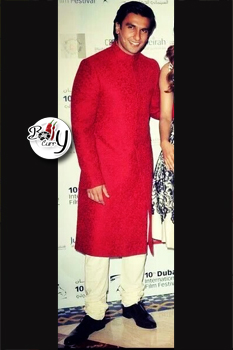 Here is another charmer, the eccentric Ranveer Singh who has a certain liking for Sabyasachi clothes and has been spotted many a times in them. Recently attending the Dubai Film Festival for the promotions of his upcoming movie Gunday, Singh wore a red Sabyasachi sherwani with off-white pajama and black dress shoes and we must say, he was a sight to behold. Such a sober reflection of his restless persona and the touch of royal elegance, we applaud him for going all the way to appropriate the occasion and the place he was at. Or maybe he was just giving off feelers to someone who favors red (lahu munh lag gaya!).

'Love looks not with the eyes, but with the mind' and we do appreciate all these skillful artists to wear a color so difficult. We hope our review made you look into Red with more perception. Let us know what you thought about our celeb's fashion sense and share your valuable opinions with us.


Writer: Nabila S.
Editor(s): Urooj K. and Jenifer Y.
Graphics: Fizii
Do you have a suggestion or comment for BollyCurry? Drop us a PM at  BC_Dropbox today.
22 Likes