Mumbai-born model-actress Sonali Bendre is the next Celebrity In The Spotlight!
Sonali was born on January 1st, 1975, into a Maharastrian 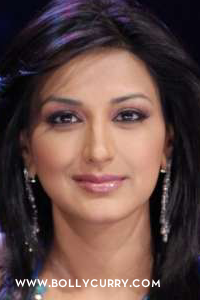 family. She commenced studying in Bangalore and then Mumbai, at Kendriya Vidyalaya Malleshwaram and Holy Cross High School Thane respectively.
Like many actresses and actors of Bollywood, Sonali started off as a model. She was later chosen for Star Dust Talent Search. Whilst staying in Mumbai, she was invited to receive training from many of the industry's most talented performers.
Sonali made her first appearance in Bollywood in 1994's Aag, opposite Govinda. While she may have initially struggled to become a renown actress, she ultimately succeeded, receiving acclaim critically for the films such as Diljale (1996), Zakhm (1998), Sarfarosh (1999), Hum Saath Saath Hai: We Stand United (1999) and Tera Mera Saath Rahen (2001).
Sonali has also received much praise for her style of dancing. Her graceful postures were most noticed in the films Gaddar (1995), Bombay (1995), Major Saab (1998) and Lajja (2001).
The actress has not only been seen on the big screen but also on stage in a play called Aap Ki Soniya, and on the small screen as a judge in India's Got Talent and Indian Idol. In 2003, audiences got the chance to see Sonali again in a cameo in Karan Johar's superhit, Kal Ho Na Ho, as Shah Rukh's doctor.
In 2002, Sonali married film actor/director Goldie Behl and the couple welcomed a baby boy on August 11, 2006, whom they named Ranveer.
Did you know?
Editors: Anhdara & Jenifer
Graphics: Sano