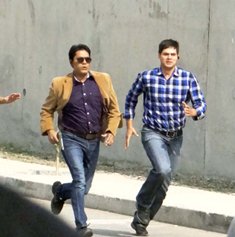 The CID cops are ready to take you through a thrilling adrenaline filled twin series set against the backdrop of the International Kite Flying Festival in Ahmedabad. Whether it is the Haute Couture lanes of Paris or the intricate jungles of Maharashtra or bustling streets of Chandni Chowk, ACP Pradyuman and his team of cops have gone everywhere to hunt the criminals in their pledge to eradicate crime.

And now, CID cops Shivaji Satam, Daya and Abhijeet with their team have landed all the way in the Kite Capital of Gujarat to shoot for a special Makar Sankranti twin episode series in Ahmedabad.

The episode will feature a murder mystery woven around the backdrop of the famous International Kite flying festival in Ahmedabad. CID cops reach Ahmedabad in search of their missing officer Shreya and in this search the cops face another murder case. Ahmedabad Police and the people of Ahmedabad support them in solving this case which takes place during Makar Sankranti festival. The cops are on a hunt for the criminal all over Ahmedabad from the beautiful locales of the Sabarmati Lake, to the gullies, to the heritage houses in the city.

Will CID survive this blow from the criminals? Will the CID be able to find their missing officer?

+ 5
7 years ago Wow nice article! Thanks a lot tellybuzz for your daily articles on the show! It's really nice of you! :)

7 years ago Waiting for tonight AND wish for Daya to protect Sreya.