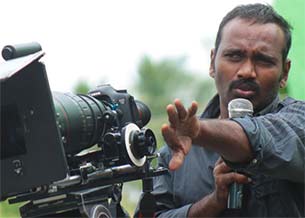 Cinematographer-turned-director S.D Vijay Milton, who is elated at the response to his Tamil directorial "Goli Soda" that released Friday, credits the film's lead cast of four child actors for the success.

"It's not easy to make a commercial film with child actors. But I was lucky enough to work with these very talented kids. I'm delighted with the overall response and I think the credit goes to these kids, who worked extremely hard in their respective roles," Milton told IANS.

"The realistic stunts in the film were particularly raved by the audience as well as critics. I think this is my biggest achievement in my cinematic career," he added.

Set against the backdrop of Koyambedu market, the film narrates the story of four kids who lock horns with the local bigwig.

"The film had a limited release but thanks to the overwhelming response, we have added the film in 40 more screens across the state," he said.

Buoyed by the success of the film, which was made on a low-budget, Milton now plans for a sequel.

"We have plans for the sequel. In fact, we may go on floors in a few months. I'm sure it will be as interesting as the prequel," he added.