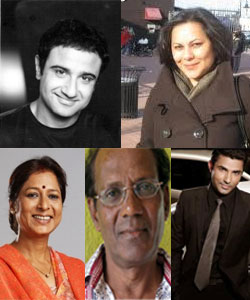 Our source states, "Vivek Mushran and Ritu Vij will play a couple in the show. The elderly cast of the family will comprise of Virendra Saxena and Alka Amin of 12/24 Karol Bagh fame. Mazher Sayed will essay the eldest brother and Anirudh Singh of Khwaish fame will play the middle brother. Fresh face Manish Tulsiyani, who has done few ads, has been roped in to play the male lead in the show; he will be the youngest brother in the family. The production house is still looking for an apt face to portray the female lead".

"The show which is set in Delhi is about two neighbours who stay in one house and the two patriarchs are very close to each other and are bosom friends. They have this habit of fighting in the morning, only to make up by the end of the day. The male lead belongs to one family while the girl belongs to the other, and will grow on when the two fall in love", adds our source.

When contacted, Vivek Mushran told us, "Talks are on, but nothing is decided yet".

Mazher Sayed too denied that he has been confirmed for the show, and said that he is working out things.

We could not get thro' Alka Amin and Virendra Saxena..

Let's see how this show fares on Sony..

10 years ago Thanks for the awesome news!!!

Looking forward for this show!!!

10 years ago Sony, it's good that you are trying different kinds of shows but don't forget that most people started watching your channel only because of JJKN. We want a sequel!

10 years ago Guys, did you see Maryaada? Priya has found out that Brahmanand is the one who molested her in the past. What do you think she should do now? I have posted my message for her, you too can on- http://bit.ly/HelpPriya

palak1 10 years ago Wow Alka Amin is back on television she was awesome in karol Bagh !!!

10 years ago Welcome back Manjuji, missing you and Karol Bagh.

+ 2
10 years ago Rather than wasting their time and efforts on new shows, Sony TV should work towards promoting their awesome shows Saas Bina Sasural and Baat Hamari Pakki Hai of which the latter's storyline has gone for a toss

10 years ago i think it replacing Tera Mujhse Hai Pehle...

+ 3
10 years ago Wow Alka Amin is back on television she was awesome in karol Bagh !!!
Would love to see her again !

+ 3
10 years ago plz plz plz cast Rati as the female lead...she'll do full justice to the role