It may not be a justified act to judge a show by its first episode, however, we at TellyBuzz have taken up the responsibility of reviewing our first impression on the newly launched shows adding up to the everlasting list of the inexhaustible television shows. As it's said, the first impression is the last impression. So here's a small peep into the opening episode of the serial. 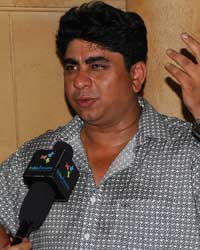 Rajan Shahi's Director's Kut have ably produced some of the most successful shows of today's times namely Bidaai and Yeh Rishta Kya Kehlata Hai. So expectations evidently rise up from Shahi's next 'Chaand Chupa Baadal Mein'. Does it live up to the expecttions? Let's find out…

The episode opens up with a quick narration from renowned lyricist and writer, Javed Akhtar. Voice-overs may not be a new phenomena in television shows, but a personal narration from an established personality definitely adds up to the freshness and value of the show.

As far as the storyline is concerned, we get to see the same family structure where the maternal aunt shows artificial affection towards her niece, a smart and dominating parallel female lead, the angry father trying to find ways from his financial crisis, a naughty young brother and a sweet, understanding grandmother. Don't we deserve something new?

Post the voice-over enters Nivedita the protagonist (played by Neha Sargam), an innocent, soft – hearted girl having a crowd phobia. Neha visually may not be convincing enough as a female lead but surely has the potential to excel and has succeeded in generating interest among the audience by her portrayal of subtle innocence and appropriate expressions. Seeing the lead in tears in the very opening episode doesn't seem to be acceptable. However, one can expect some enjoyable moments from the young at heart grandmother played by Sarita Joshi.

The male lead Abhishek Tiwari may have the smart boyish looks but how convincing he would turn out to be as far as his acting skills are concerned, is one aspect we need to watch out for.

Well, Rajan Shahi has always been known to introduce new fresh faces with his shows, which though not appreciated by the audiences at the nascent stage, turn sout to be iconic figures in due course of time.

Presently the most credible aspect of the serial seems to be the Shimla backdrop and a simple presentation without much special effect. And the top priority stands to be whether or not the serial will survive the cutthroat competition it faces with other successful shows being aired at the prime time slot on other channels.

As fas as the first episode goes,  here we go..

10 years ago CCBM is one of the few serials I watch. Though the Javed Akthar Promos prompted me to watch the initial few episodes I quit watching it after that as I found the story line boring. Thanks to the Writers for bringing in the Viren character to add spice and life to the dead serial that I started watching it again.

ctms 10 years ago I have been viewing CCBM from the start.This is one of the very few serials I have been watching-it was a very cute story in the beginning and sid and putul is one of the best pairs I've ever seen on TV..but the way the story is moving now is so weird with so many unnecessary twists and many things left unexplained..I really can't make out where all this is heading to...the only character showing some sense now in the serial is dadimaa ..sid has turned out as a dumb character now (may be to match divya)..
why is dadaji not expressing abt his wish being manipulated by chanchal even when he's now in a better condition?
why are the evil chars always happy in this serial?
why siddharth is not resolving the issues even after knowing the truth ,if it's for dadaji then he should know that dadaji also stands for truth.(sid who could never see tears in putul's eyes is only seeing that now and still he is staying quiet )
why divya can't still make out that nivi and sid love each other.she should have known that very early and even sid had told her first about his love to putul (and she had never tried to find out why he changed his mind and became ready to marry her ).atleast by all the happenings till now she should be able to make out...
why is no one inquiring abt keshav?
viren who landed in simla all of a sudden from abroad(and that too in a bike ??) is proposing all of a sudden to his dushman's daughter (or planning a plot whatever) without even trying to know what happened earlier between the families...there a lot of diconnects and repetitions happening throughout the serial...to conclude i must say that even if sid-putul is brought together there is no way the serial can retain its old magic because of the unnecessary events and the boring evil characters who dominate the serial are winning all the time..

RoshiEIyer 10 years ago Get rid of melodramatic, evil characters and plot, yea Divya's emotional blackmail if she wants to die kill her character she cant even act all she does is smiles like a spastic most of the time. Her character is a real bimbo she should have been blonde! lol!There is no coherence between her facial expressions and the script/ or what she is trying to express! Get dadaji better soon so he can speak and Chanchal and her husband will be publicly exposed. Get some lighter moments in the show, its getting toooo overdramatic and evil.

10 years ago This show was once so beautiful n light with positive relationships. In teh past one month, it has turned negative n full of evil! A beautiful love story waas twisted n ruined by evil n the beautiful lead pair broken up to accomodate a new hero to increase TRPs. Whatever u do, TRPs will not increase unless u make the story less evil n show true love winning!! Get Sid n Putul togetehr back...

RoshiEIyer 10 years ago The storyline is now becoming so predicable and not to mention boring, why cant the writer be innovative and come up with something new. I started watching this cos it looked different from other Indian soapies, but now the same thing separate 2 people who are in love! And what nonsense truth prevails when it seems more like lies/deceit/ evil prevail, like the rest of them. Why cant Sid n his mum see through transparent Chanchal….and tell me about Divya's mum! Seems like the writer/s are attempting to kill the ratings of this show it may not even make it. What a waste of introducing Kinshuk….its more like step backwards for his career, If this predictable storyline continues. Why cant they get sid and nivi together!!!!

nivdaadi 10 years ago story of such a stupid family. Even after many gettogether family is unable to find the girl who is going to be married. Please stop making fool of people

shelar 10 years ago the show is getting interisting as well as so pridectable i dont like nivi as she is so repetative in her acting always the same constipated look on her face and crying all the time and how much confusion ;;;;people are so dumb and stupid that they do not know which of the girls is getting engaged !!!anyways divya is very good love to see her in the show.

10 years ago I like the lead pair.The story also good.But don't look like a love story any more.Its more of a revenge story of dadi and chanchal where the lead pair and nive's family are puppets.
I like the sweet rhythm betwn sid and nive.even though its very small ,in between Divya's interruption is always irritating.I don't understand why there was a unnatural full 32 smile all the time.
Now teh director is really making nive very boaring.Too much sacrifice rona dhona makes anyone boaring to watch.
I would say pair kinusk with Nive,that could be more intresting!!!!

sweetydesi 10 years ago the show is getting interisting but where is divya!!!!!!she is so goood and where is kinshuk pls let us know if divya and kinshuk are paired plsssssssssse make them a pair and let the boring nivi sid be together plssssssssse.