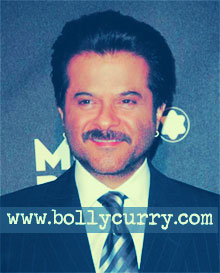 With his comic flick, No Problem, just around the corner, BollyCurry takes a look at this extremely versatile actor as he continues his reign on the big screen!
Nickname: Lakkhan
Whilst no doubt a private yet well connected star in the current scenario, Punjabi-speaking Anil started off as somewhat of a loner whose interest in acting (influenced by the legendary Raj Kapoor) resulted in him being cast in Tu Payal Main Geet as a child artiste opposite Shashi Kapoor.  However, the movie was sadly never released but the distraction he continually sought in histrionics resulted in his being ousted from college due to his lack of presence.
Later thereafter, he joined Roshan Taneja's acting school and after a few small acting jobs, he landed his first lead role in Woh 7 Din, also starring the legendary artist Naseeruddin Shah and pairing him with Padmini Kolhapure. Since then his odyssey in this industry has been an upward graph - sometimes pacey, sometimes slacking, but always on the rise. Anil Kapoor over the years has come about to star in over 100 movies, successfully produced his own projects and, thanks to his roles in Slumdog Millionaire and American series 24, his name is one among the globally recognized Indian biggies.
Did You Know?
* Father was Shammi Kapoor's secretary.
* Has shaved his mustache for only three movies so far - Lamhe (1991), Jooth Bole Kauwa Kaate (1998) and Salaam-E-Ishq (2007).
* First noticed for his mimicary act on Raj Kapoor.
* Despite brother Sanjay Kapoor also being an actor, the two have never starred in a movie together.
* Won a National Award for Pukaar, 2001.
4 Likes