In this edition of BollyCurry's popular feature, Celebrity in the Spotlight, we choose to bring into the limelight an actor who's making his Bollywood debut later this month, but has already taken the nation by storm with his suave looks and impeccable acting in various Pakistani television serials, including the immensely popular Zindagi Gulzar Hai and Humsafar. Starring in Disney UTV's much awaited film Khoobsurat(2014) opposite Bollywood's very own fashionista Sonam Kapoor, Fawad Khan is here to stay! 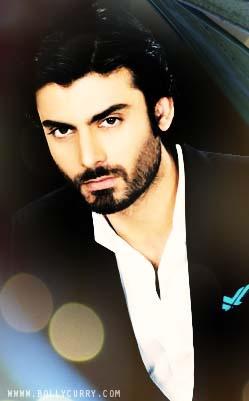 Despite being an engineer by profession, Khan had an inclination towards the world of glitz and glamor from a very young age. He made his modelling debut at the age of 13, continued to appear in commercials and actively participated in school plays and other cultural events. It was at the screening of one of Khan's high school plays where a Pakistani director took note of his talent and encouraged him to try his luck as an actor in television shows.
Taking the director's advice to heart, Khan debuted in 2000 with the Pakistani television show Jutt and Bond, while he was only 19. In 2010, after a 10 year gap, Khan landed the lead role of Hassan in the television adaptation of the popular novel Bano. The show was an instant success, and Khan became a household name in Pakistan. Following this, he went on to portray the role of Asher in the popular 2011 Hum TV drama Humsafar, based on Farhat Ishtiak's novel of the same name. Humsafar went on to become one of Pakistan's most critically and commercially acclaimed television shows, and Khan received worldwide recognition for his impeccable acting. He then appeared in the Pakistani Hum TV drama Zindagi Gulzar Hai (2013) as Zaroon, where he starred alongside popular actress Sanam Saeed. Zindagi Gulzar Hai went on to become one of Pakistan's most popular dramas of the year and won him and Saeed a lot of critical appreciation for their fine acting prowess. He was also seen in the 2012 drama Ashk and 2013 drama Numm, both of which went on to boost Khan's career graph. Zindagi Gulzar Hai, incidentally, was recently telecast on an Indian channel, Zindagi, which made Khan a household name in India as the show gained widespread popularity.
Khan made his film debut with the Pakistani film Khuda Kay Liye (200)], which was the highest grossing film of the year, and received widespread adulation for his portrayal of the troubled musician Sarmad. He also appeared in the 2013 film Armaan, based on Waheed Muran's 1966 film of the same name. The movie was a success, and went on to win Khan and his co star (Aamina Sheikh) the Best Couple Award in the Tarang Housefull Awards.
Khan is also an accomplished singer and musician. He began his music career by starting a rock band, the Entity Pardigm, with some of his friends. One of his band-mates, Ahmed Ali Butt, was his co-star in the television drama Bano. Their first album Irtiqa, released in 2003, went on to become a huge success. Khan then composed and produced a number of singles, all of which were met with acclaim.
On the 19th of September, Khan will be making his Bollywood debut with Disney UTV's upcoming romantic comedy Khoobsurat, a remake of the 1980 film of the same name, which originally starred the yesteryear beauty Rekha in the lead role. Reports suggest that he has also been signed for Yash Raj's next, where his co-star is slated to be Kareena Kapoor Khan.
Khan has been a nation wide phenomenon in Pakistan, and his foray into Bollywood later this month will only serve to increase his loyal fan base. He is said to appear in a number of films, including Sultana Siddiqui's next Pakistani film, and Summer Nicks' science fiction film Kolachi, which is currently in post-production.
Did You Know?
From this BollyCurry writer and the rest, we wish Fawad Khan all the very best for his upcoming Bollywood projects, especially Khoobsurat, and hope that this film catapults him into stardom.
Author: Ritchelle C.
Editor/s: Pooja B. and Gunia K.
Graphics: Komal P.

Do you have a suggestion or comment for BollyCurry? Drop us a PM at BC_Dropbox today.
63 Likes