Bollycurry is back yet again with Celeb In The Spotlight!
This week, the celebrity is none other than Khiladi Kumar aka Akshay Kumar!
The Indian actor was born on September 9, 1967 in Amritsar to a Punjabi family. Akshay's father was a government employee. Most of his childhood was spent in Chandni Chowk in Delhi and then he moved to Mumbai. In the busy city of Mumbai, he lived in Koliwada which was also a Punjabi dominated area.
Akshay studied at Don Bosco School then went on to study at the Guru Nanak Khalsa College. 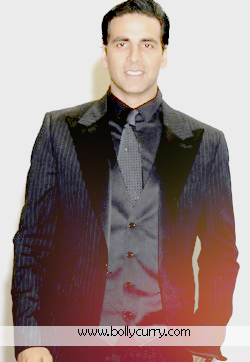 Khiladi Kumar then decided to go to Bangkok where he studied martial arts and was a chef in a 5 star hotel. Later on he took up a fellow student's advice and ended up doing modeling assignments for which he earned approximately Rs.5000 for a shoot of two hours.
After several modeling assignments, producer Pramod Chakravarthy discovered him and signed him for the film Deedar. But his big break came in 1992 when his movie Khiladi released. It was followed by Main Khiladi Tu Anari and Mohra in 1994 which led to his popular title "Khiladi Kumar".
1995 marked the start of the "Khiladi" series in which all his films started with the word Khiladi and nearly all of them were hits at the Box Office, strengthening his title.
Getting tired of his action hero image, he decided to try his comic timing and starred in the film Hera Pheri (2000) which gave him immediate commercial success as a comedic actor.
As for his love life, Kumar dated actresses such as Shilpa Shetty and Raveena Tandon but tied the knot with Twinkle Khanna, daughter of Rajesh Khanna, on January 14, 2001 after being engaged to the gal twice. The happy couple became proud parents of a baby boy named Aarav in September 2002.
Did you know....
Through all the ups and downs of life, Akshay has made it as one of Bollywood's top actors.
Hopefully, adding yet another BO hit to his long list of films will be his upcoming release Patiala House which hits theaters on February 11, 2011! Do go check it out!