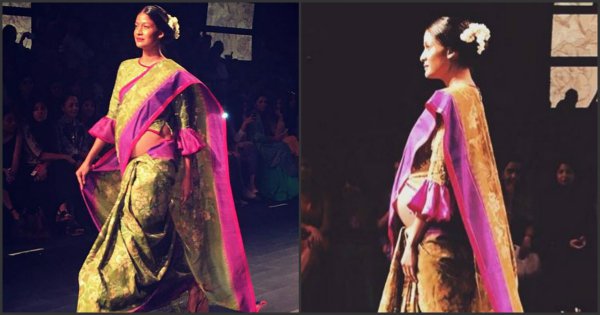 Visibly pregnant models were never a trend in Indian fashion shows till supermodel Carol Gracias, flaunting her baby bump, came down the runway for designer Gaurang Shah on the second day of the summer-resort edition of Lakme Fashion Week on Thursday.

"Mom to be Carol Gracias walking for Gaurang Shah at Lakme Fashion Week," the designer posted on his Instagram page soon after the show.

Carol flaunted a beautiful green and pink sari but it was not the designs but the confidence of soon to be mother while taking the walk that grabbed eyeballs of people present in the show area.

While song writer and singer Manasi Scott set the tone playing a beautiful composition of Indian Jazz music as 40 models walked gracefully down the ramp one after another, it was Carol who stole the limelight in the show with her grace - and has hopefully laid foundation for the trend.

Disha Patani flaunts her curves as she attends her childhood best ...

+ 5
5 years ago love it... theres NOTHING a pregnant woman should be shamed for!!!! good to see ppl breaking norms ~