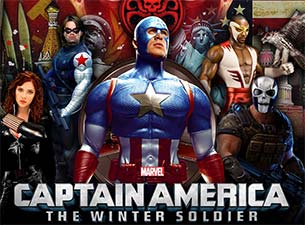 "Captain America: The Winter Soldier" hit as many a 1,200 screens in over 200 cities in India Friday, backed by tie-ups with 16 brands - touted to be the highest for any Hollywood release in the country.

It is a day and date release in India and the US, and to bring the theatrical experience alive and to give fans an opportunity to own products of the Marvel superhero Captain America, Disney India's consumer products business has collaborated with 16 brands across categories including apparel, accessories, toys, home and more.

For Indian audiences, "Captain America: The Winter Soldier" has been dubbed in Hindi, Telugu and Tamil, while the Hindi dub will also be available in Dolby Atmos. It can be viewed in 2D or 3D.

"Action as a genre works well with our audiences when it comes to Hollywood films and we are confident that the film will be enjoyed thoroughly by all," said Pandey.

The idea behind the brand tie-ups is "to give fans in India an opportunity to own products inspired by their favourite Marvel superhero", according to Roshini Bakshi, vice president and head (Consumer Products, Retail, Publishing and Franchise Marketing), Disney India.