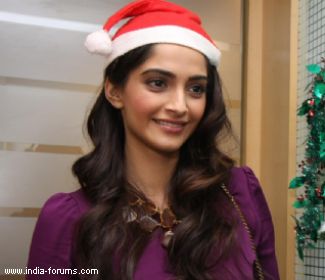 Elder daughter of actor Anil Kapoor and Sunita Kapoor, Sonam made her Bollywood debut in 2007 with Sanjay Leela Bhansali's "Saawariya" opposite Ranbir Kapoor. Since then, she has starred in movies "Aisha", "Delhi-6", "I Hate Luv Storys", "Thank You" and "Mausam".

Celebrities like Shahid Kapoor, Bipasha Basu and Priyanka Chopra took to Twitter to send out their wishes to Sonam.

Here's what the celebs had to say:

Genelia Dsouza: Happy birthday Sonam Kapoor, may you have a great year ahead.

Ritesh Deshmukh: Sonam Kapoor wishing you a super duper birthday - have a great one.

Madhur Bhandarkar: Sonam Kapoor my heartiest wishes to you on your birthday. Have a successful year filled with success and glory.

Farah Khan: Happy birthday to one of the sweetest, nicest girl Sonam Kapoor... I'm in Dubai, getting you a gift from here... A camel.

Sophie Choudry: Happy birthday Sonam Kapoor! Hope its a fun, exciting and memorable year for you.

The birthday girl replied to all the tweets saying: "I wanna thank all the sonaholics for making me trend for my birthday!! I'm so so so touched!! Love u."

Kareena Kapoor Khan’s 40th Birthday: Inside Pics give ...
3 minutes ago

Fire erupts at NCB office building in Mumbai; No injuries ...
14 minutes ago