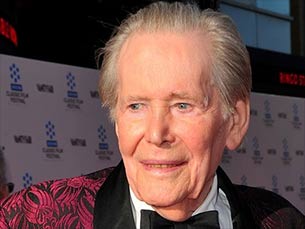 O'Toole, best known for his role in "Lawrence Of Arabia", died Dec 14 following a long illness at the Wellington hospital, London.

Celebrities took to Twitter to express their grief. Here is what they have to say:

Amitabh Bachchan: What? Peter O'Toole no more! That is most sad!

Anupam Kher: My first acting job was of an extra with Peter O'Toole in "Kim". I had one line with him. His presence and performances were mesmerising. RIP.

Madhur Bhandarkar: Peter O'Toole was one of the acting world's most charismatic figures. His memory will live on for decades to come. RIP.

Abhishek Bachchan: So sad to hear of the passing of Peter O'Toole. 'Lawrence of Arabia' is one of my favourite films. A huge inspiration to all actors. RIP.

Manoj Bajpayee: RIP Mr. Peter O'Toole! Thanks for your performences! Thanks for guiding us through all the great work that you have put in front of us! Loss.