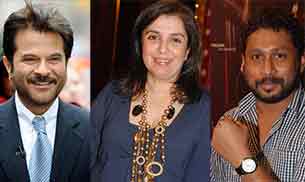 Bollywood celebrities like Anil Kapoor, Farah Khan and Shoojit Sircar are cheering for Hollywood actor Leonardo DiCaprio who won the best actor in comedy or musical award at the 71st Golden Globe Awards held in Los Angeles, US.

DiCaprio was honoured for his role in "The Wolf of Wall Street". He essayed Jordan Belfort, a stockbroker, in the black comedy directed by Martin Scorsese.

Here's what the Indian celebrities had to say:

Anil Kapoor: Yes! I was right! Leonardo DiCaprio is the best star actor in the world today.

Sophie Choudhry: Leonardo DiCaprio wins at Golden Globe for one of my favourite performances of the yearr! Loved him in 'The Wolf of Wall Street'! About time he gets an Oscar!