View Profile
The race for product endorsements among the B-town celebrities today, is at par with the race for good movie projects, perhaps even a notch higher! For higher is the promotional trend acquired by appearing on repeatedly telecast TV commercials and higher is the money that exchanges hands!

Stars pocket amounts that run into several millions of rupees annually for brand ambassadorships and product marketing alone. Indeed then, it becomes vital to them, to vie for the bigger names and bigger pay packets as such, while riding high of public popularity.

So if you're one among the ardent fans, who loves to watch a favorite celebrity become the face of a favorite consumer product, read on for the tally charts we at BollyCurry draw up for you. 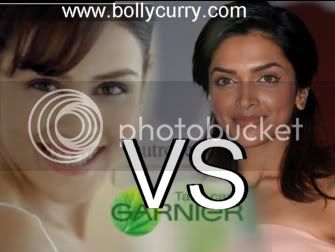 Deepika Padukone (Neutrogena) vs  Genelia D'souza (Garnier)
Mirror mirror on the wall, who's the lovelier of them all?! Two pretty faces, winning deals, stealing hearts! DP and Geni from the younger brigade of tinsel town's demure(not) damsels are making constant waves. Your vote for the beauty product endorsing beauty queen is...?

Sonam Kapoor (L'oreal Beauty Products) vs Aish (L'oreal Total Repair)
L'oreal indeed managed to ensue a brand war between these two gorgeous ladies, set apart by the years! While the reigning older one was pressed to move on to promoting products suiting her (ahem) age bracket, the younger masakalli charmed her way into becoming the face of fair maidens for L'oreal beauty products. Who is it for you - old so gold, or Gen-X behold?!

Preity Zinta (Cadbury's Perk) vs Rani Mukherjee (Nestle Munch)
Not exactly the current day adverts, or even the current faces - but these mega divas of the 90's and beyond sure gave a push to the sales of their respective chocolate delights! Where was your incline - with perk-y Preity, or munch-ing Rani?!

Kareena Kapoor (Head & Shoulders) vs Bipasha Basu (Clinic All Clear)
While Bips has been around with the Clinic team for a while now, having done some work with beau John himself, Kareena is a recent addition to the H&S family. So are they Kareena's golden locks or Bipasha's darker mane that wins your confidence?

Interesting comparisons? Be sure to let us know of your personal picks!