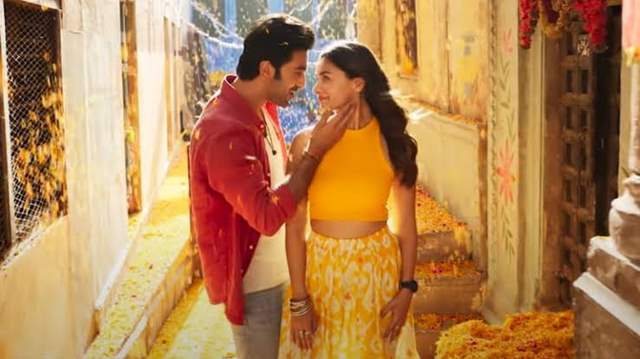 Ayan Mukerji’s Brahmastra is one of the films that hasn’t failed to get out of the spotlight since its announcement. Despite of multiple delays and challenges, the makers have kept the buzz alive.

On the day of Ranbir and Alia’s wedding, as an ode to their love story, the makers of Brahmastra had unveiled a small glimpse of their song Kesariya and it became an instant hit.

In the song, Alia and Ranbir can be seen romancing each other. The tune of the song has struck a chord with the audience and since its release they have been waiting with bated breath to listen to the full track. Now as per reports, the wait will be finally over as Ranbir, Alia and the makers will launch the complete song on July 15th.

Outside of the realms of fantasy, action, and adventure, Brahmastra also relies on a promising original music album written by Pritam, and officials assert that the music will enhance intrigue in the film. Chart-topping albums like Barfi, Yeh Jawani Hai Deewani, Ae Dil Hai Mushkil, and Jagga Jasoos, to name a few, were Pritam and Ranbir's collaborative work. They would continue their fruitful collaboration in this way, read the report.

Arijit Singh sings the Hindi song Kesariya. The song will be available in Hindi, Tamil, Telugu, Malayalam, and Kannada, each of which has a distinct flavour and a calming voice. On July 15, Pritam and the Brahmastra team are eager to share the unit near their hearts, it concluded.

Brahmastra, meanwhile, will debut on September 9 in IMAX, 2D, and 3D formats. With this action-packed adventure, director Ayan Mukerji hopes to give Indian viewers a truly distinctive modern mythology. In the next two months, the crew will actively promote the movie through the release of a variety of materials, including music, videos, and mini-promos. Ranbir Kapoor, Alia Bhatt, Amitabh Bachchan, Nagarjuna, Mouni Roy, and Dimple Kapadia make up the film's prominent cast.