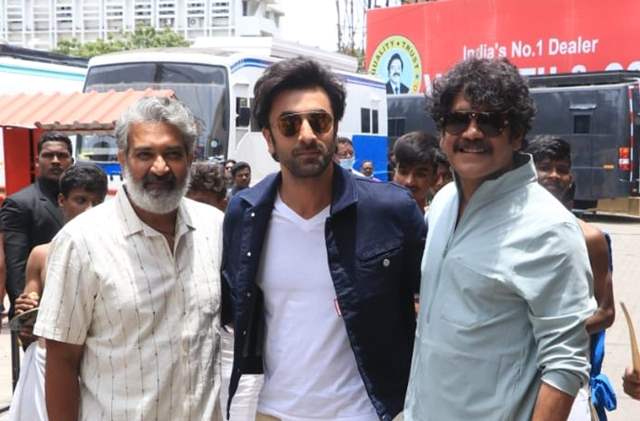 Stating that a film like 'Brahmastra' will take Indian culture to the world, S.S. Rajamouli of 'RRR' and 'Baahubali' fame said on Wednesday that what he liked the most about Ayan Mukerji's upcoming magnum opus is that it is a commercial way of telling the story of 'astras'.

Participating in a pre-release press conference in Chennai, the ace director, who is presenting the film, said that 'Brahmastra' is not only one of the most awaited films, but is also one of the costliest productions of the year.

"Ayan dreamt about creating a world that we have never seen before -- the magnificent world of astras that we have learnt from our history, our puranas," Rajamouli said.

"As children, we heard about these astras but have never seen their splendour," the ace director said.

"That is what Ayan has dreamt. It has been a long journey from 2014. He has been ably supported by Karan Johar, Ranbir, Alia, Nagarjuna and Amit sir. Thank you all for making me a part of this fantastic journey," he added.

Explaining why he liked 'Brahmastra' so much, Rajamouli said, "Creating a world that Ayan has created is not easy. Ayan has created a power which still has some limits. He provided the scope to create a bigger villain and also created a scope for the struggle for good to win over evil. It is not like a fairy tale. It is like a commercial way of telling the story of astras. This is what I like about 'Brahmastra'."

Continuing to explain why he loved the film, the director added, "Ayan made sure that among all the astras, including 'Vanara Astra', 'Agni Astra', 'Jalastra' and 'Brahmastra' -- love is the strongest. Not just telling this fact in dialogues, he made sure that his point comes across. That love will win over everything."