View Profile
Malaika Arora Khan is someone who has donned the role of a daughter, wife, mother, fashionista, dancer, actor, model, host, mentor…the list is endless. But the point is she has donned each of her roles with grace defined. Presently, she is seen giving patient advice to the contestants of Star Plus' Perfect Bride. 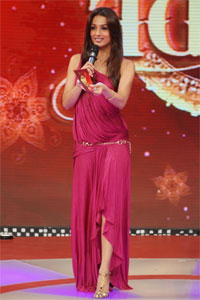 Featured Video
Do you think something sacred as marriage should be made the concept of a reality show?
Yes I do agree and believe in the sanctity of marriage. Star took up with this idea, for this show gave a platform to five eligible boys and ten eligible girls, who truly want to be joined by the bond of marriage. They are not in this show for fame, money or fun. They are honestly looking for life partners. For some reason people have started to think all reality shows will end up making the concept of 'marriage' a joke. But I certainly don't support the idea of marriage being a farce. At least all my ten years of marriage have made me believe in just that!

What made you choose the show?
It was something new to me as most of the reality shows that I had been associated with till now were dance based. Also I wasn't required to judge anyone and say- you were bad today or you were good today. All that they needed me to do was to be a mentor for the contestants and advice them based on my experience as a married person.

One of the eliminated contestant's father voiced that it was enough that he got to see a star like you. It didn't matter if his daughter got eliminated. Do you think this attitude is correct for 'the father of the girl'?
(Takes a huge breath and smiles) I think it's very humble of the person to say that. You cannot hold such an attitude against him. And even the father was overwhelmed. It was a bit of a high drama for him because barely the first round was finished and his daughter was on the brink of elimination. I think I would give him the benefit of doubt.

How much of reality is there in this show?
Well there is a lot of reality which we get to see on television. All contestants are living together. The girls are dealing with their prospective mothers-in-law. There will be fights. At the end of the day, egos will be bruised. Girls are eyeing the guys. Guys are eyeing the girls. And even such a situation may arise that three girls like the same guy. There's bound to be a conflict of interests. They are given tasks to do. Some of them can't cook to save their lives. So yes, that is all reality that you are seeing.

Malaika, even you've had a love marriage. Do the contestants ask you about it?
For me both love marriage and arranged marriage is the same. In love marriage, you take the effort to go find someone for yourself and in arranged marriage, you leave that responsibility to someone else. For me that's the only difference. And yes the contestants do ask me all sorts of personal questions like- How did you both meet and stuff. Their enthusiastic questions are fun but only till a point. I only entertain them within a limit. (Smiles)

Isn't there an impending sense of fear that this show might end like the Rakhi one?
I would like to disagree, as that was a show where one single girl was trying to find her groom from a group of boys. But here we have a bunch of girls and a bunch of boys all who are very serious about getting married and they are using this platform to get married. They may find a connection or they may not. We don't know. We are not God. We just can't predict how things will turn out. We too haven't promised that at the end of this show you will get to see a wedding. No, it's just that if a lucky guy and girl happen to find their soul mates in this show, they win themselves some goodies. That's all.

Why do you think the small town girls featured in the show are so mature?
Look at the amount of exposure the young generation gets today! Plus, the girls are all from educated families with a good educational background for themselves. They all have got their own jobs, so they are very independent too. See they are not backward uneducated girls. So give them some credit for their maturity. Plus I think girls always are mature. They grow up way faster than men. (smiles)

The ratings so far, considering that this is a seven day a week show, aren't that good…
I don't know what the ratings are. It's a brand new show. It's a concept that's still catching on. And I think the TRPs will pick up as there's a lot of things going on in this show…

Will you dressing in both Indian and western wear?
Yeah…

Tell us about your relationship with both you mothers-in-law.
Fantastic…touch wood by the grace of God. (Laughs) They are both lovely women. Both of my mothers-in-law are great!

13 years ago shut up rambo55. i mean what the hell! she's one of the richest. canu seriously go in front of her and say that no i don't think so and matter of fact u would get out a pen to get a autograph. am i right. what's wrong with her. everone dances.

ps: i'm sorry rambo55! it's my birthday and everyone forgot so. i'm just a little pissed. sorry again everyone.

13 years ago i'm afraid they would not say the same about their daughterinlaw.
i mean who wants a daughter i nlaw who exposes around other men flaunting her body,doing item numbers & faking divorce news just to promote brands.
Dhanya hogi woh sasumaien jinki aisi bahu ho,bhagwan bachaien inhe!!

+ 4
14 years ago i say, she absolutely rocks! Madhuri, you are a superb actress and my god, with you million dollar smile, you still have everyone gasping and whistling...! you really are one of the best actresses to ever grace BOLLYWOOD!

+ 2
14 years ago Madhuri is always going to be a part of bollywood, no matter what the age
luv ya mad!

14 years ago my cousins has the tickets for the show and i cant go as my stupid idiotic boss told me i cant have a day off at the last minute....now i cant call in sick b/c she knos i need a day off to go to a concert.....aaaaaaaaaaaaaaaaaaaaaaaaaaaaaaaa
ill miss my fav actress.....so not fair....