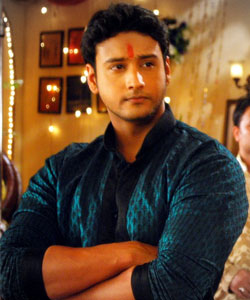 Yash Dasgupta who came into the limelight as the adorable Suraj in Balaji Telefilms' Bandini plays the rough and tough guy Karan in COLORS' Na Aana Is Desh Laado.


In a candid chit-chat with Tellybuzz, Yash talks about being Karan and the emotions and actions pertaining to the role.

How do you feel being part of Laado?
I am really satisfied to be part of the show. I am happy being Karan as the character has gotten popular with the limited number of scenes that I have done so far.


How did you prepare for the role?
Karan is similar to Yash and it always happens that whenever I get into a role or a scene, I completely live in the character. I had not taken any substitute for the scene where I was supposed to break a mirror and also I have not used body double for the fight sequence with the goons. I believe that the authenticity would be liquidated because of the falseness. My journey began with Basera and Bandini, and I am satisfied with what I have done till now and I am expecting more to happen for me thro' this role.

What was the reason you took up Laado?
When I went for the auditions in Shakuntalam Telefilms, I had a choice between Aditya and Karan, but I could relate myself more to Karan and felt that the character demands both the shades of a person which we see in normal life. And I finally took up Karan.

How is your rapport with your co-stars?
I have a very good rapport with all the cast of the show especially with Madhurjeet Saghi who plays my mom and Tarun Anand who plays my dad. And apart from them, I get along well with Shreshth Kumar also.

With whom do you gel well on the sets?
Tarun Anand, Rajveer and Shresht Kumar

You are part of a show that has already made a mark in the industry; how do you see it?
It is indeed an added advantage but more than that, it is a responsibility because we have to keep up the pace that the  former actors have set for the show. As actors we are the new faces and people judge the show based on our performances. Hence we have to make sure that the characters are not diluted from their normal approach. We actors have to take a step to carve the character and fight for the stand of the character.

You have undergone a makeover for the show Laado; how has been the experience?
Yes, I had put on weight during Bandini which I am trying to lose now. But frankly speaking, the physique has helped me to connect with Karan as he is a tough person and has to fight with goons; if I had a slim body, the scenes would not have come well. And the look in the show is completely normal with simple shirts and jeans which I personally like. Initially even I was not so happy with the look, but then when I realized that the character and the look is really popular, I completely love my look.

Viewers feel that there is a kind of similarity between Karan and Raghav. What's your take on it?
Actually I had not kept track of the show earlier because of which I had no idea of the character of Raghav. The look and attitude of Karan resembles the old Raghav. There is yet another striking similarity between them as both Karan and Raghav crave for the love of Ammaji. I have no issues with the comparison as both the characters have their own stand.

How is it working with Meghna Malik?
She is a sweet person on the sets and not at all like the typical Ammaji, but at the same time I do not know much about her because she always keeps to herself. I would take it as a learning experience to work with such talented and fine actors like her.


Karan has been having an insecurity complex when it comes to the family caring a lot for Aditya. How will this track proceed?
In the coming episodes you will definitely see the complex in Karan, but all his activities are justified by the fact that he has been ignored and kept grounded till date.

Will Karan have a romantic angle in the story to come?
It is an unavoidable fact that in a show, it is impossible to have a guy without a girl opposite him and I suppose in future there might be a love track.

How has the journey been for you as an actor?
I have always been reminded that having a handsome face and body doesn't make you an actor and I am happy that my journey has been really good. I have done shows for DD and also several other shows, but from the popularity and appearance, Basera is my first show. I was a part of Bandini after the leap. Laado gave me a role which is completely different from the rest of the characters that I have played.

Your upbringing?
My dad was into transport business, and I have traveled a lot across different places. I did my graduation from MP.  But when I was doing my Twelfth, my mother was diagnosed with cancer and hence had to put a halt to my education for her treatment. But today I am happy for what I am.


How did acting happen to you?
I have had a good physique since my school and college days as I was into sports. I used to take part in plays and dance performances, and that prompted me to try my hand in acting.


Bandini has gone off air; how do you feel?
Actually I had only a small part in Bandini and it was not completely my show. But at the same time I learnt a lot being with the crew and especially the production team. The show going off air is evidently upsetting.

This is the first time with Colors; how is it working with them?
Frankly speaking, this is not my first show with Colors because I have done a part in Koi Aane Ko Hain which was an episodic show. But doing a prominent role in a show feels really good and I am happy to be part of the team.

What do you enjoy playing most; positive or negative?
I enjoy playing grey characters and the character of Karan is one such. He is a normal guy and his actions make sense.

What was the most struggling part of your life?
There was a time when my mom and dad were not here in Mumbai and I was struggling with auditions and was always in the phase of rejection. I had given up during that time and joined as a Gym manager. It was my mother who encouraged me all the time and asked me to give myself a second chance and it really worked because I had got Koi Aane Ko Hain.

Which was the most challenging role out of the three; Ketan, Sooraj and Karan?
It is Karan because I feel that the character is 70mm and I enjoy a lot playing Karan.

+ 2
10 years ago LOL, Raghav never craved for Ammaji's love. He was Ammaji's laadla.
@brainychild - Raghav didn't marry Sia initially to get his Mother's love. He did so because he thought that they would be able to settle a score with Sia, for coming in Ammaji's ways, and to teach her a lesson.

Maybe these actors need to be apprised of the earlier plots so that they do not make such faux pas.

10 years ago Good to know that Karan and Jogi share a good off-screen relationship ;)
But resemblence btw Karan and Raghav?? Well, I cant see any :(

+ 4
10 years ago I have fallen for him the moment I saw him in ladoo.. His charactar Karan is the best..

+ 2
10 years ago sophia21: i agree he was the ladla but in a sense he did crave her love. if he didnt marry sia or do all that crap that she asked him to he wouldn't have been her ladla... he did it because he wanted ammaji's love and praise...

but what does he mean that karans character is 70mm

hunk10 10 years ago D only similarity between raghav n karan's character wat i feel is their eagerness to do stuffs for amma in raghavs case n jogi in karan's case to get their love.... neways nice one.... karan rocksss:)

+ 2
10 years ago Nice and interesting interview, thanks for sharing this one. I really like Karan's character in NAIDL and how he is portrayed by Yash, it's very good! Though, I haven't ever thought that much about similarities between Karan and Raghav. Yet I guess, there are some similarities, but the big difference would be, that Raghav was Ammaji's 'ladla' and poor Karan isn't even noticed.

So, good interview and I'm looking forward for a lot more scenes with Karan^^

Nice interview! I am hoping to see more of Karan in Laado!