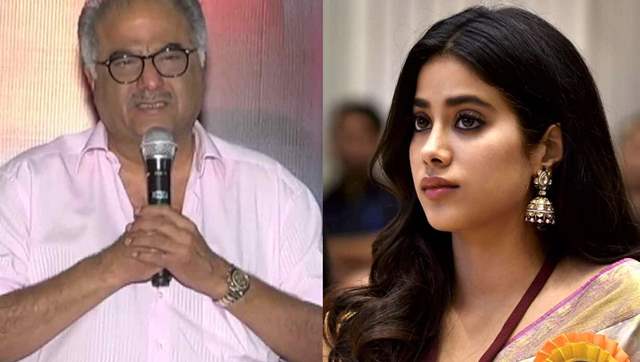 Janhvi Kapoor is all set to undertake intense preparations for her upcoming film 'Helen' and daddy Boney Kapoor says, "If you look fake, audience will reject the film..."

Janhvi Kapoor recently flew down to the United States to join her sister Khushi Kapoor and her half-sister Anshula Kapoor in their vacation. The actress was seen having a gala time with both her sisters and was also seen giving her fans a glimpse of her outings on her social media.

But, keeping aside her personal vacations, the young diva has ample of work commitments lined up for her and currently she in for some hard-core preparations for her next film Helen which is a remake of National award winning Malayalam film Helen helmed by Mathukutty Xavier.

The film revolves around a simple - charming, working class girl who follows the policy of honesty and gets locked in the freezer of a supermarket!

This role and the film will require Janhvi to project her fears and physical abilities as the temperature collapses below-zero degree temperature. For her preparations, the actress will spend time in isolation and also experience first-hand trauma of being placed in freezing temperatures.

Producer of the film is none other than Janhvi's dad, Boney Kapoor and he says that it’s going to be a challenge for his daughter and actress Janhvi Kapoor to be  doing a survivalist  drama so  early in her career. And hence he even gave her a firm piece of advice i.e. to work really hard and not look fake or else the audience will reject the film

If you look fake doing it, the audience will reject the film. Janhvi will have to work really hard to convince the audience of her character’s predicament.

The  last Indian actor to look fully convincing in a survivalist drama was Janhvi’s Roohi co-star  Rajkummar Rao in the film Trapped.