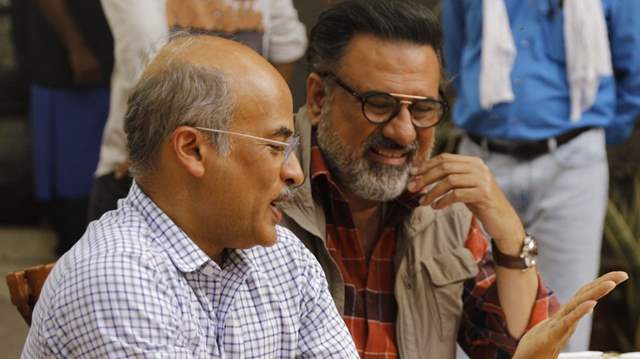 Sooraj Barjatya wanted to make a film about hope and a film he would love to make for himself. Thus, Uunchai was born.

The first person who came to mind as the protagonist was Amitabh Bachchan, who admits he took on the film without a second thought because his son Abhishek insisted he did it.

Talking about it Amitabh said,

"when children grow up they become your parents. You can say, I did this film with parental guidance."

Next came Anupam Kher who has traversed the journey with Rajshri from Saaransh for almost 4 decades. Admitting that Rajshri is family, Anupam took in the task to bring in Boman Irani who was reluctant to take up any film post a recent personal tragedy where he lost his best friend. Anupam said,

"Boman is my friend. As is Sooraj. If Sooraj wanted Boman, he should get him. Besides, Boman should not miss this opportunity of being part of such a beautiful film with Sooraj Barjatya. So I brought them together just as any good friend would."

Thus unwittingly, the making of Uunchai became about family, friendship, and hope.

"I think Anupam is a generous actor who wanted the fellow actor in me to do this beautiful film. Rajshri is a temple to me today. Looking back, I feel Uunchai is a fitting tribute to my late friend."

Uunchai is one of 2022’s biggest releases that boasts a legendary ensemble, a seasoned director, an iconic production house, and a story whose heartbeat is friendship. The film’s tagline – Friendship Was Their Only Motivation is the backbone of the film’s trailer.