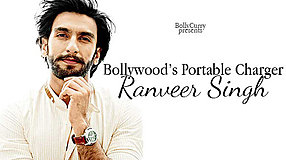 As a part of our feature on Workaholic Day, which happened to fall on the 5th of July, we at BollyCurry are featuring some of the most prominent workaholics in B-town. To open this week, we present to you Bollywood's very own portable charger, a term coined during the famous IIFA Awards that were telecasted earlier this week - yes, we're referring to the flamboyant Ranveer Singh!

Always in the news for his ridiculously high energy levels, Singh is known to be quite the workaholic. Only recently, he's had a bout of bad luck for dislocating his shoulder during the shoot of his upcoming film, Bajirao Mastani, which is why he had to undergo a surgery. It is common knowledge to one and all that he live tweeted selfies from the operation theatre, something which left his fans and friends chortling in amusement. What many don't know, is the dedication with which this man bounced back to work.

Just a few days after his surgery, Singh was up and about promoting his then upcoming release, Dil Dhadakne Do, sporting a sling for his injured arm. His injury didn't hamper his energy levels one bit, and he was seen enjoying the promotions of the film in full gusto. It came as a surprise to many, when during the recently concluded IIFA Awards 2015 in Kuala Lumpur, Malaysia, not only did Singh dance enthusiastically with a cast, but also removed the cast at the end of his performance, and hosted the event with no signs of any injury.

If this wasn't all, reports suggest that Singh has recently purchased an apartment that is closer to the sets of Bajirao Mastani, as he wasn't able to accommodate the physiotherapy and shoots, as well as all the travelling. Given that he is currently shooting some intense fight sequences, leading to increased physiotherapy sessions, Singh thought it would save time if he lived closer to the sets, and had his physiotherapy sessions either on sets or close-by at home.

Now this is one facet of baba that many were definitely unaware of! Here's wishing Singh a speedy and complete recovery, and all the very best for his upcoming film, Bajirao Mastani,which is all set to release on the 18th of December, 2015.

Editors: Pooja B. and Gunia K.