There have been many weddings in Bollywood over the years, both on and off-screen. Weddings are a reason to celebrate with friends and family; they are colourful and lively affairs full of cultural and traditional values. From the North to the South, be they religious or sentimental, a wedding is an affair close to one's heart. Moreover, no two weddings are exactly the same. Therefore, taking this opportunity, BollyCurry presents to you a variety of weddings that has taken place in tinsel town. 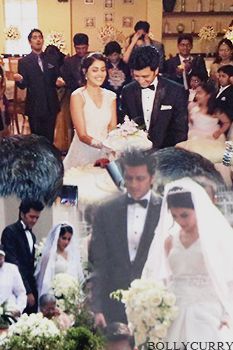 Riteish Deshmukh and Genelia Dsouza had two very different wedding functions - a church function and a traditional Maharashtrian function. The events leading up to the church function were glitzy and glamorous, but the white wedding itself was a little on the quiet side, just the way the couple wanted it. The duo looked stunning in their attires. A posh lunch and then a big wedding reception followed up the private affair. 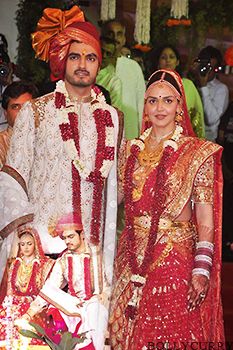 Esha Deol opted for a traditional South Indian wedding to Bharat Takhtani at the Hare Rame Hare Krishna temple in Juhu. There were flowers, chants and a live musical performance by South Indian women. The groom arrived at the mandap in a chariot and the bride was gracefully carried in a doli covered in flowers. The couple were married with the bride's father giving her away in the kanyadan and Bharat tying the mangalsutra around Esha's neck. 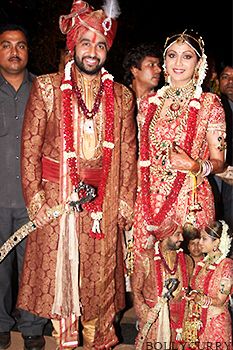 Shilpa Shetty married Raj Kundra in a Hindu ceremony, more specifically, one of Bunt traditions. The couple exchanged the seven traditional vows while circling the sacred fire in a villa in Khandala. The function preceded with a number of parties, which started of with a sangeet and was thereafter followed by more parties, including a lavish wedding reception. The functions were a multi-day event and was a relatively private affair. 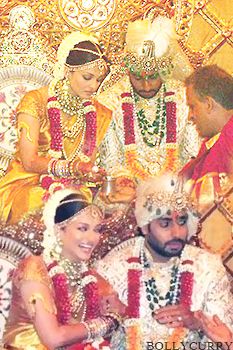 In what was hailed as the hottest Bollywood wedding of the time, Aishwarya Rai Bachchan and Abhishek Bachchan tied the knot in a traditional Vedic ceremony. Both families are devout Hindus and so every ritual was preferred to be traditionally done. The couple exchanged vows on the auspicious day of Akshay Tritya, with the sindoor specifically brought down from Vindyachal, UP, famous for its Durga temple, as a Virnasi priest conducted the ritual. Nothing was left to chance and the affair was a lavish and colourful one, fit for the woman hailed as one of the world's greatest beauties and the son of Bollywood's ultimate superstar. 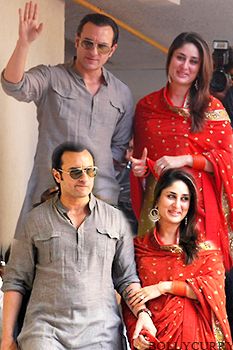 In contrast, Saif Ali Khan and Kareena Kapoor chose to marry in a registry ceremony. It was a small affair with just family present at Saif Ali Khan's residence in Bandra. This was followed by a Nikah ceremony the next day at the Taj Mahal Palace Hotel and two wedding receptions. There was also a sangeet held for friends and family.
Of course many other stars have chosen to get married in many other ways - destination weddings, simple temple weddings to name a few. A wedding day is a special day after all and their choices reflect their values. A small intimate affair or a lavish fun one - all leading to one happy conclusion.
Writer: Aradhna K.
Editor(s): Fatima W. and Jenifer Y.
Graphics: Saraa K. and Shikha A.
10 Likes